My friend and fellow urban sketcher and teacher extraordinaire Oliver Hoeller is moving from SF to Austria, so I took the opportunity to join him in yet another urban sketcher workshop last weekend, in the area around the Ferry Building in S.F.

The morning was “Sketching 101”. I was interested in learning how he builds his playful and entertaining urban scenes with pen and then pimps them out with various media. (The afternoon was titled “Pimp Your Watercolors”!) 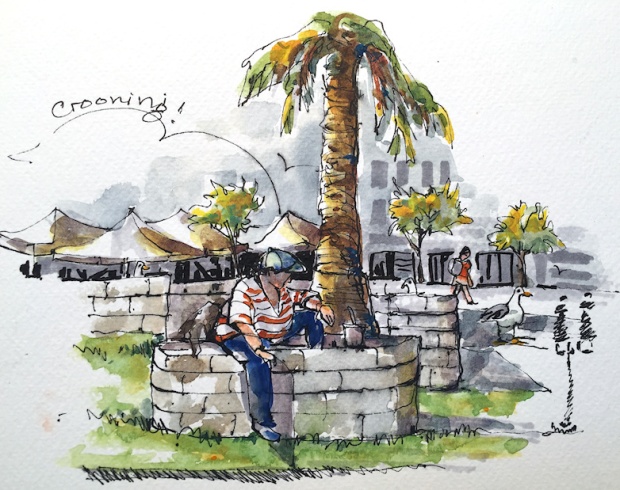 We were coached through the steps of growing a sketch out from the center, using added line weight to add form, textural lines and gray value pens for contrast. A musician was crooning Frank Sinatra and similar era songs with amplification all morning. 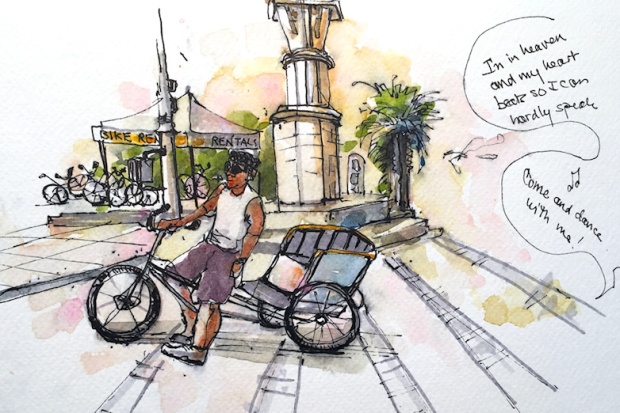 Four days later I’m still trying to get those songs out of my head! But they did find a place in the sketch. The idea with building out the sketch like this is not that you put in what you see, like a camera that you hold still. There were hundreds of people passing across this picture plane as I sat there. I would have had a nervous breakdown trying to draw them and all the palm trees!

So you pick what you like – the muscle man on his taxi bike (who disappeared after 5 min) – a couple of palm trees – a bit of obelisk and bike rentals. Enough. Next exercise. 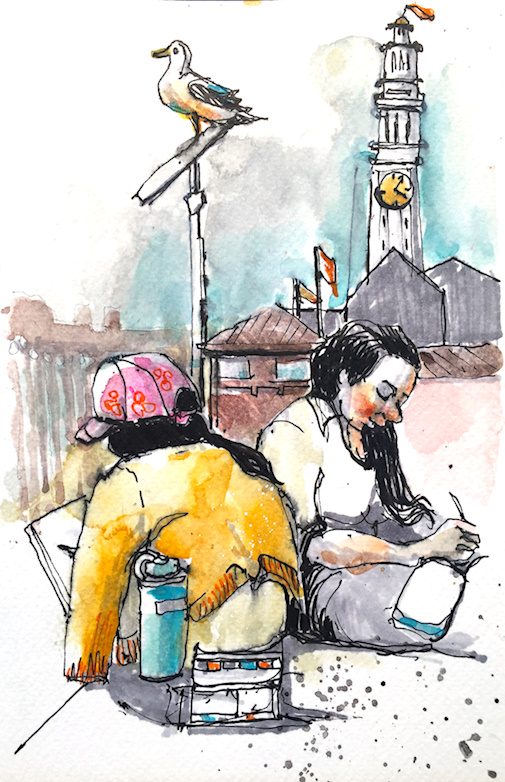 After lunch we moved down the pier toward the Bay Bridge and started pimping. Here I’m trying out all kinds of stuff, sampler style: gray pen shading, splatter, textural marks, watercolors gone overboard!

2″X4″ two-color quick-y looking out at the bay.

And finally this view looking out at a (wonky) Bay Bridge and Treasure Island, and trying to incorporate as many of the tools as possible.

The workshop ended at 6pm, and most of the workshop students continued for another day. Now comes the digestion phase! Practicing, integrating, making it my own.

Although Oliver is moving, he’s promising to return to do more workshops in the Bay Area and in other locations where he’ll be traveling. If you’re interested contact him and get on his email list.