On Sunday I spent the day at Golden Gate Park’s Botanical Garden with over 40 nature journalers and John Muir Laws.  If you don’t already know, Jack is a Bay Area treasure; a naturalist, artist, author-illustrator of numerous nature guides, and entertaining guy who helps people to wake up and interact with the natural world by journaling about it. 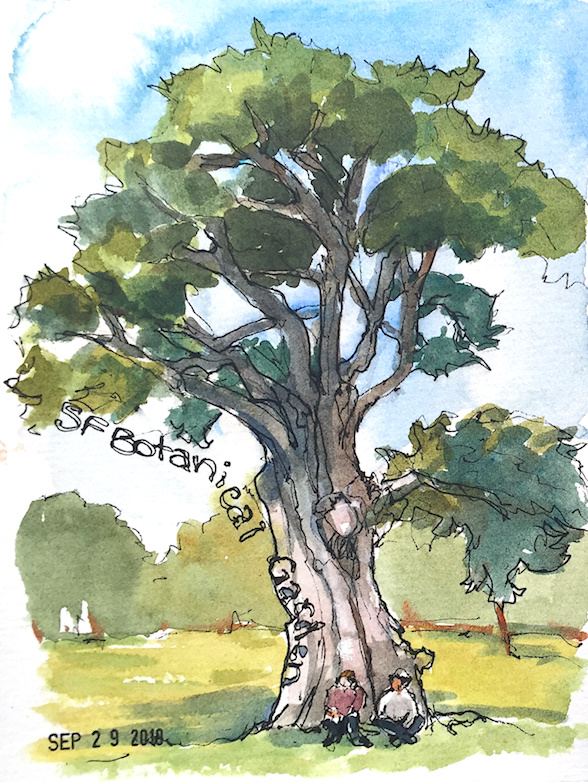 You can’t help but fall in love with the massive tree that greets you inside the gate. While Jack was talking, my eyes were tracing the curves, like a warm up doodle. I must admit, the tree got compacted to fit on my paper, but it didn’t seem to mind, and neither did I.

Next there were docent-led tours of the park to get us started thinking about what we might want to sketch.

With such a multitude of exotic species to choose from, it was particularly hard to pick a subject to examine and sketch. I decided to try some of the more exotic varieties that would never be found growing in Sebastopol.

And started with a close up of this Snakebark Maple, which was labeled RARE. When you take the time to look closely, not only do you start to see so many different patterns and green mixes, but bright pinks and reds as well.

The Ancient Plant Garden gives the opportunity to go waaay back in time and trace the evolution of plant life. Admittedly I used a bit of artistic license in the coloring here, but this giant fern was mostly in the shade.

The leaves on this Gunnera plant from the Jurassic era were about four feet across, but I was drawn in by the reddish “fruit” cones, and the fact that there was a bench with a good view of this. There was also a lady from the sketch group who was drawing there. We engaged in lively conversation, which made it difficult for my eyes to follow the lacy folds . . .and I got quite lost and had to make stuff up. Once again lots of red in all that green.

With just a few minutes to spare and no time to draw, I took a different approach, sketching a familiar plant, Anemones, from a distance and with watercolor. As my eyes began to focus better I caught sight of the familiar figure of St. Francis in the background.