I donned my mask last Sunday and ventured out to the Sebastopol Farmers Market, not necessarily to shop, but to enjoy some on location sketching. This setting never has disappointed me! 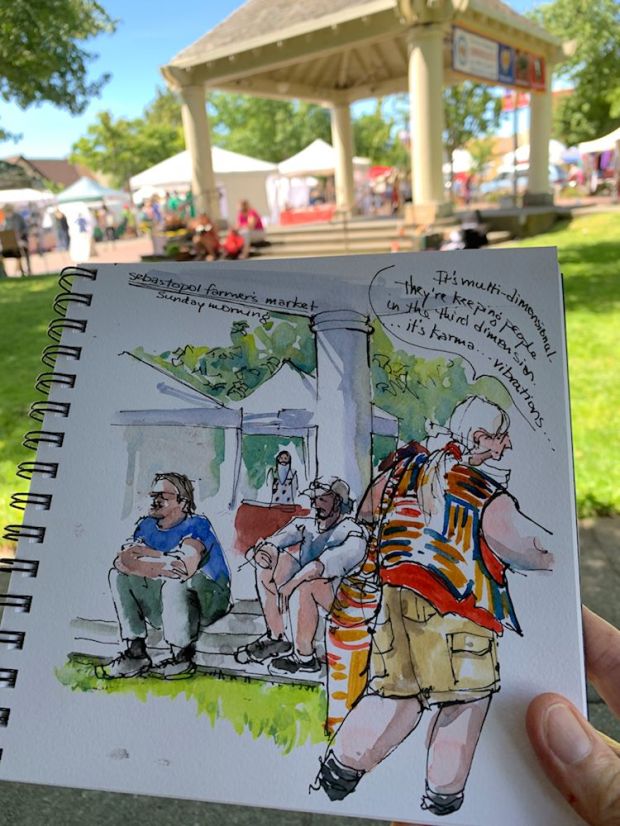 I’ve been sketching from pictures alot lately, but this one was done on location, growing out from the center as things happened. 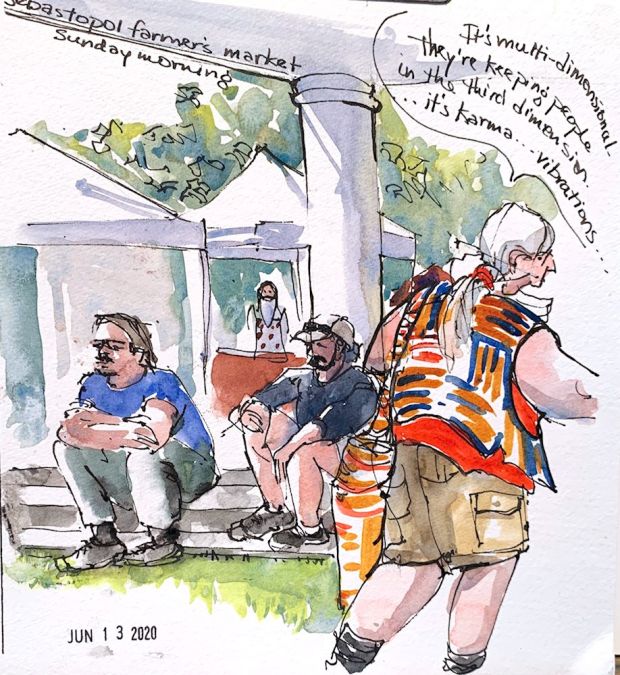 Not only did I have my mask on, but my invisibility cloak as well, which I draw around myself when sketching people in public without their permission (you never want them to pose for you and ruin it). At some point the old woman on the right showed up and started talking to the guy on the grass playing guitar. Not only was she colorfully dressed, but I caught snatches of conversation about vibrations and karma and the third dimension, all of which are probably common discussion topics on this strip of lawn in the shade in the Sebastopol plaza.

I had to look up third dimension and here’s what I learned. . .I mean if you’re interested:

“The third dimension is a theoretical realm of space and time in which the particles and dark matter of this parallel, alternate reality bends light to collide with the electrical charges of the subconscious mind. What is light becomes dark. What is dark becomes light. Some look into the third dimension and see nothingness; others believe they see the very face of God.”

I wish I’d heard the whole conversation to learn which one she saw!

Another day I attended a Sketching Play Lab with urban sketchers Suhita Shirodkar and Paul Wang on Zoom. These guys are so fun to hang out with, and FUN was the operative word. Playing with watercolor. Making colorful wet “caterpillars”, while learning powerful watercolor techniques.

And then we tried it out, playfully still! on whatever we’d put on the table in front of us. You’ll have no trouble guessing what I had brought out, from my refrigerator. 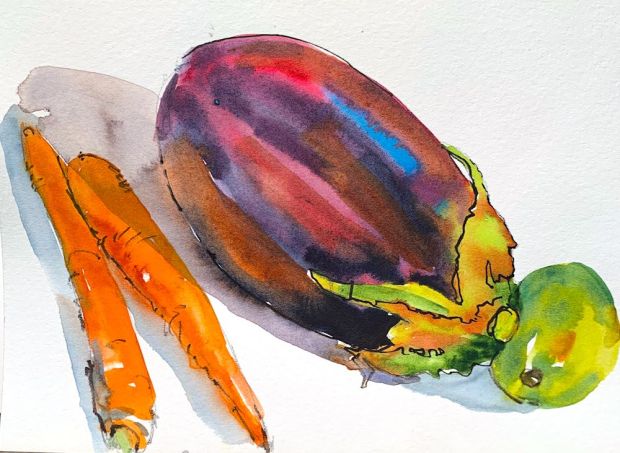 I think my eggplant was trying to gobble up the lime.! If you want to learn something new while playing, try registering for a Sketching Play Lab.

It was sizzling hot at Camp Winnarainbow in Laytonville, 2 hours north of my home in Sebastopol (northern California).  The day after I got home Bob and I went to San Francisco for the day.  As you can see in the picture, it was cold and windy, at least 50 degrees cooler than at Camp.  I dropped Bob off for a workshop at the S.F. Center for the Book and had the day to wander and sketch.  Potrero Hill was a brand new area for me to explore, so I set off with a map, not realizing that every two blocks or so I would ascend and then descend another hill.

I found these gentlemen, possibly homeless, in a small park bundled up against the cold wind and sound asleep.  Rather than turn and head on, I sat down nearby to sketch the scene and contemplate their lives. . .with compassion. I have slept in parks in the daytime, clutching my purse to my breast.  I have slept curled up on seats in airports with my legs wound around my luggage.  It was a nice neighborhood.  They would be safe there. 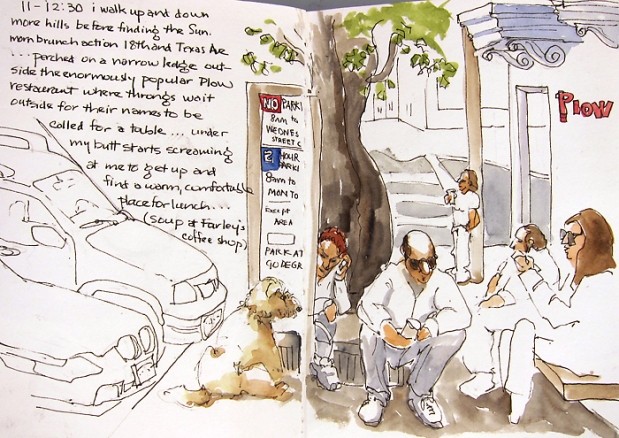 Sitting outside a popular restaurant on a narrow retaining wall, I had an unobstructed view of a different kind of crowd in this gentrified neighborhood.  The challenge was to tell the story in a short period of time, leaving out 10 times more details than I put in.  The dog was my favorite part.  Luckily the wait for a table was rather long, so I had some good models!

Here I actually had a bench in the sun which was so welcome as the wind was still blowing off the sea.  Once again so much detail to choose from, so I just started and worked my way around.  Something I’m learning about urban sketching in S.F. is that most of the streets go abruptly up or down, like the sidewalk in this scene which disappears.  I need more practice with the visual cues to quickly describe the scene.

When I’d finished the sketch I stopped in at the Open House in the residence next to where I was sitting, curious about what one could buy in S.F. for $1,150,000.   A great view in a trendy neighborhood and a place to park your car off the street.  Highly desirable in a city like S.F.  Otherwise a tiny 2 bedroom, 1 bath flat.

If you like adding watercolor to your drawings, I wouldn’t buy the Strathmore mixed media sketchbook.  I like the 5.5 X 8″ size which gives you the choice to draw across the gutter if you need more space, but the paper is not sized like w/c paper so it’s harder to do washes of color.  So once again I’ll be looking for the perfect sketchbook!