By the second day of the “Puzzling Out the Picture” workshop I had a head cold, which might have something to do with having spent a day in wet clothes during the storm. Our meet up location was Times Square. And it was again cold and windy. So I arrived with every bit of clothing I’d brought piled on me. 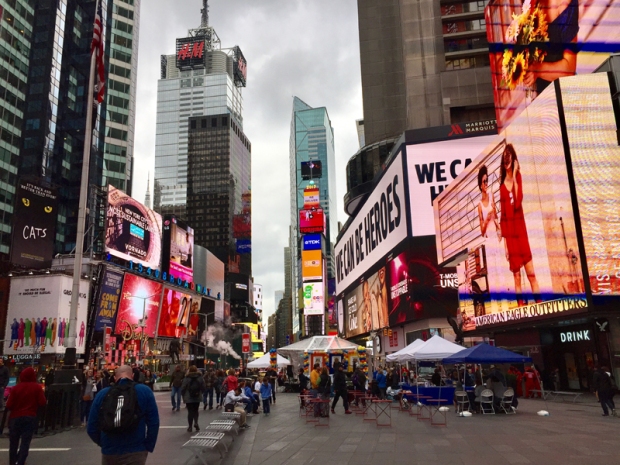 If you’re a film director you want to have lots of options for the scenes you create. If you’re a sketcher wanting to tell a visual story, it’s the same. In this setting we had everything in such abundance, and packaged in such endless distraction, that at one point, I think I blew a creative gasket! 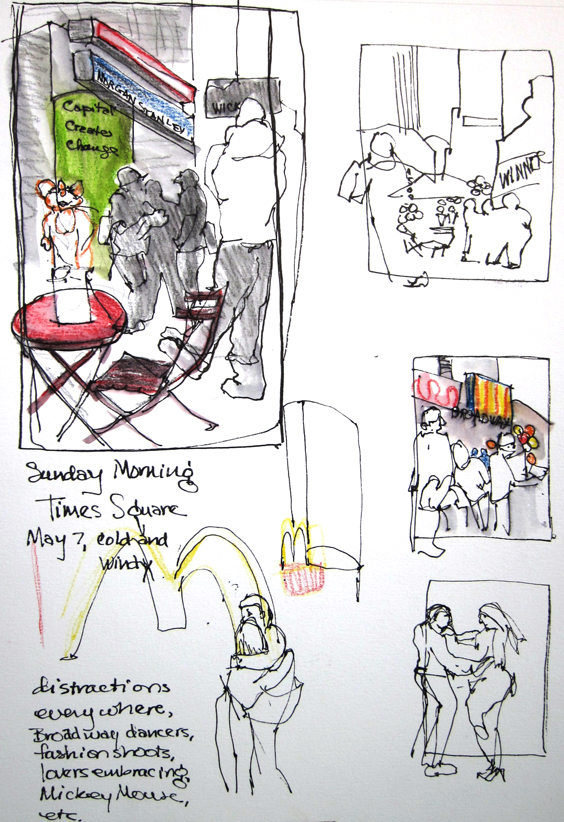 As a person who loves sketching figures, I was constantly pulled away from the “bones” of city shapes. Some Broadway dancer would dance by or fashion photographer set up his beautiful model posing a few feet away and I would abandon my thumbnails. 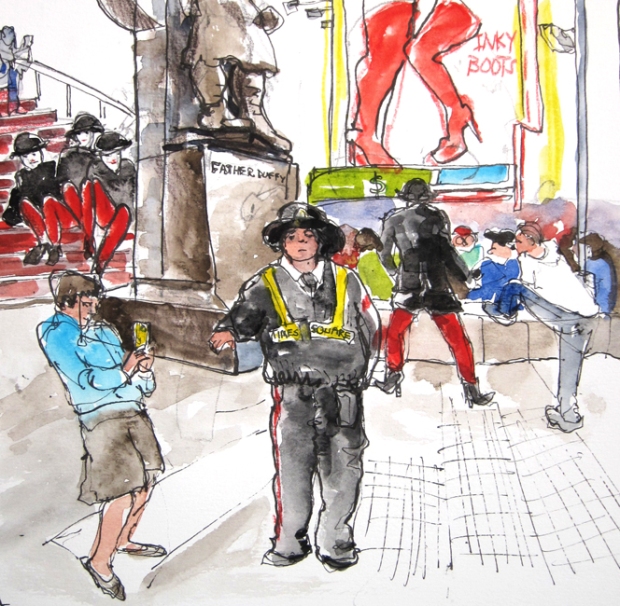 Finally I stuck with one scene long enough to tell a story.

By then it was getting cold enough that we walked to Grand Central Station for an indoor location. 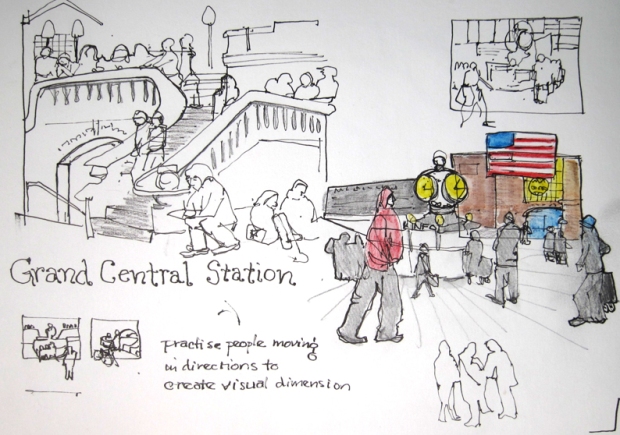 And now we really got down to the business of directional flow of people in different visual planes.  And actually, because of the movement involved, we were also recording the passage of time in a single drawing as people entered and exited the scene. Quite hypnotizing actually. 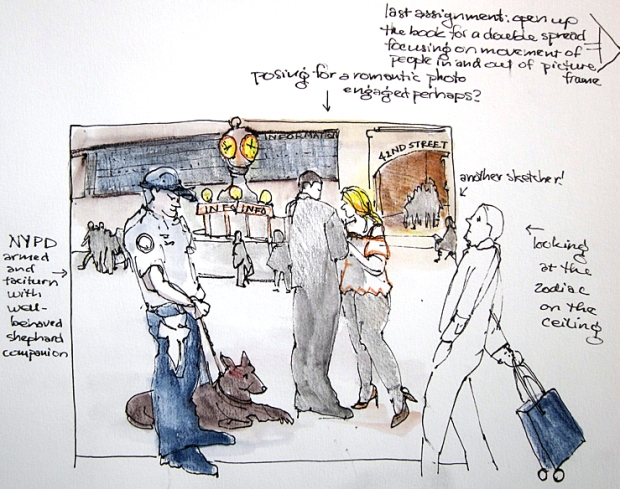 The close-up people were story-worthy. I discovered that having a person walking into the picture from outside the frame helped to see it as a dimensional space. 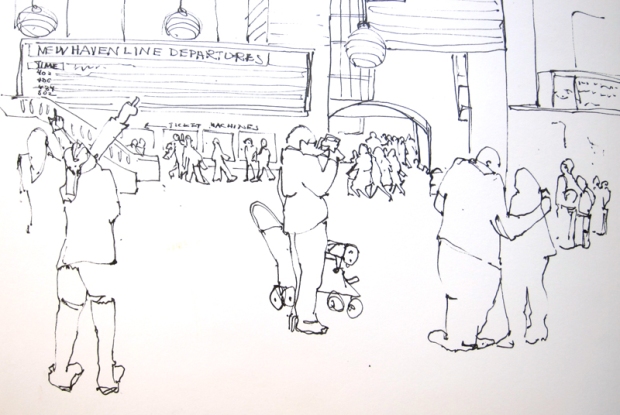 The last exercise was to open up the sketchbook (to 24″ X 9″) and sketch across the scene. This is the left side. (Note the girls on the left pointing at the zodiac ceiling.) 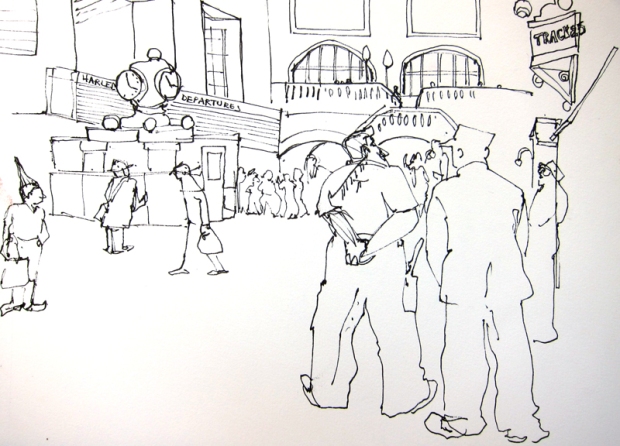 And this was the right hand side. The little elf on the left was for real, with hair spiked up about 2 feet and bright red clothes, just standing there. But my favorites were the workmen/guards in their uniforms, not going anywhere very fast.

At this point it was actually hard to stop drawing, but the workshop was over. Time to look at all the drawings, say goodbye to new friends and thank our wonderful teacher. 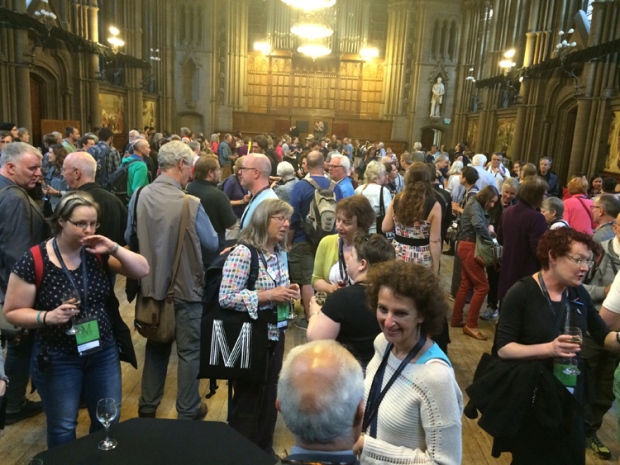 We arrived in Manchester, England shortly before the opening reception of the Urban Sketchers Symposium. The event was in the 19th century grandeur of the Town Hall with its crystal chandeliers and muraled walls.  We were met by waiters bearing trays of wine glasses. 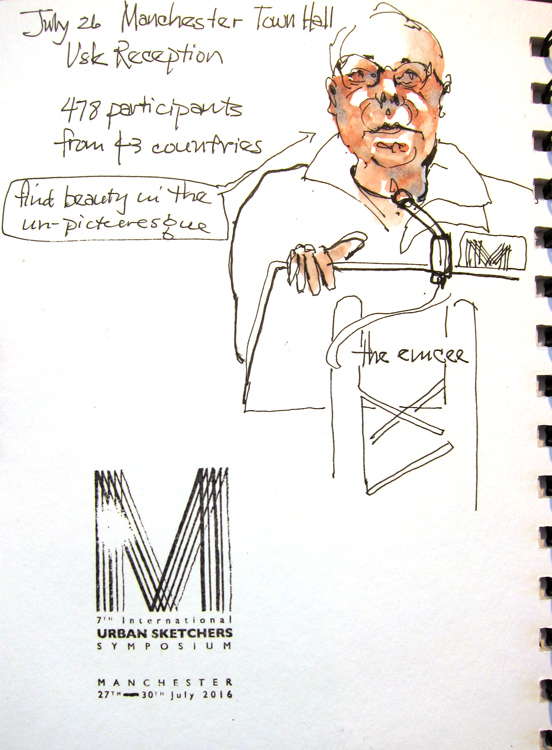 But I knew I’d truly arrived when I found the string quartet with a host of sketchers on the floor doing what all urban sketchers worth their salt do. . .plop right down and start sketching. So I joined in, and when the emcee stepped up to the mike, I found myself right at his feet. 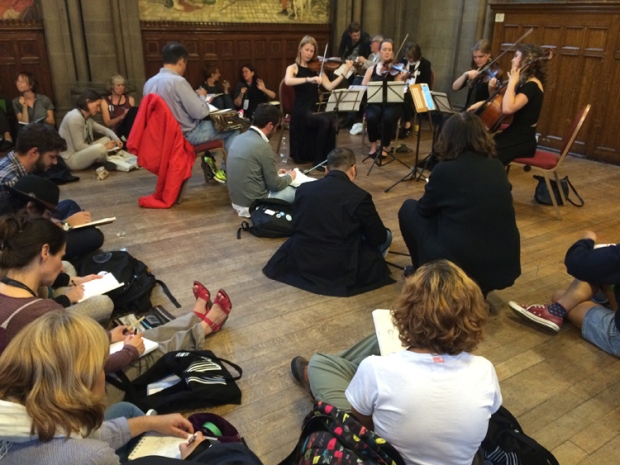 These were some of the 478 participants from all over the world. A unique multi-cultural tribe with their own customs and rituals. 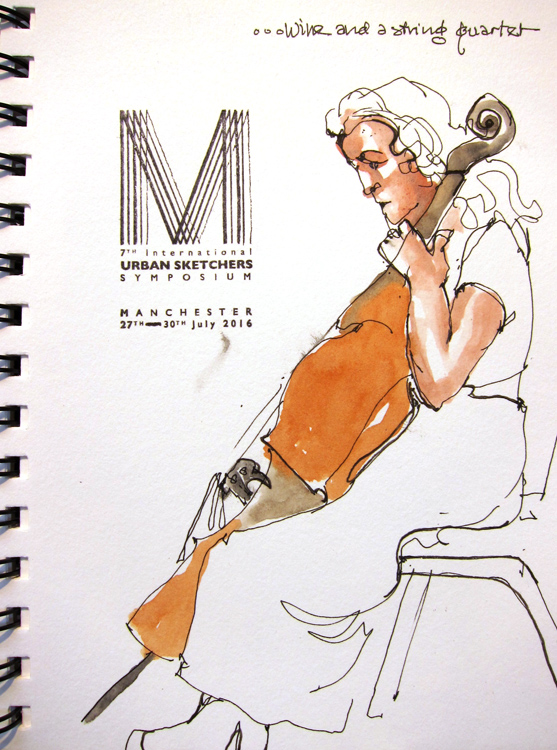 I jumped into the fast moving river and was carried along for the next 3 1/2 days. 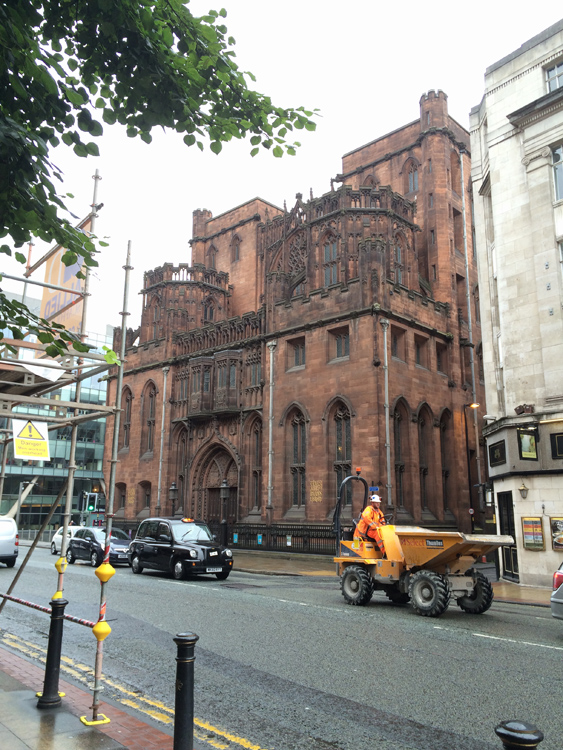 Early the next morning I boarded a double decker bus for a ride out to the John Rylands library for Liz Steele‘s “Architecture in Edges, Shapes and Volumes” workshop. Liz has been one of my favorite urban sketch bloggers/teachers for a while and it was a thrill to be caught up in her irrepressible energy and light heartedness for the morning. 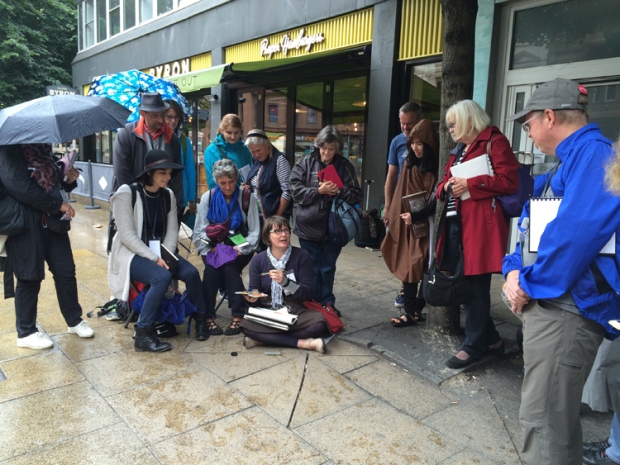 And what a morning it was. There were few breaks in the rain, but she soldiered on, giving us a week’s (month’s?) worth of teachings in 3 hours while dodging raindrops and struggling with poor vantage points for viewing the building. Meanwhile I grappled with poncho, umbrella, puddles and sketch gear and have little in the way of art to show for the morning.  Luckily Liz has an on line course called “Buildings” coming up next month. Architecture has been the weak link for me, but I’m convinced she has the key for unlocking the mysteries of doing quick sketches of buildings. 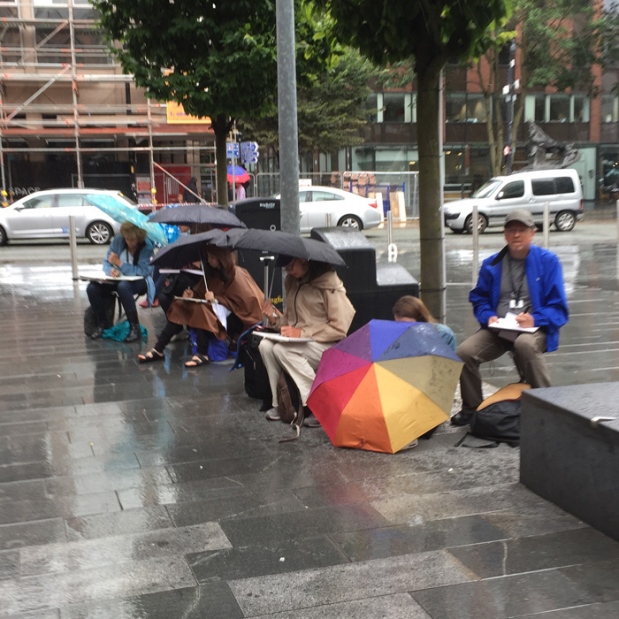 I’m the one in the middle under the black umbrella. How many hands does it take to sketch in the rain? More than I had. 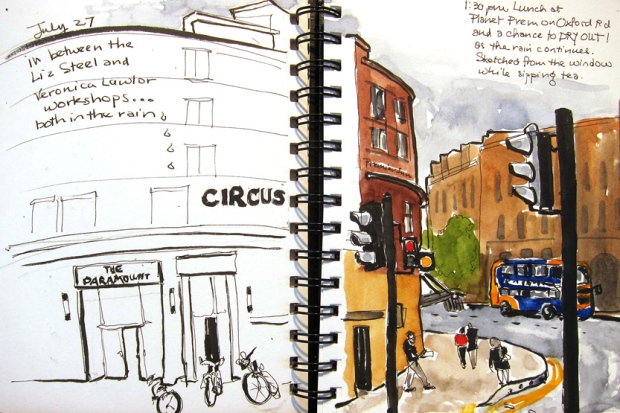 At lunch time happily I got a window seat in a deli right between two other sketchers from England and enjoyed a dry half hour of sketching an urban scene in comfort! 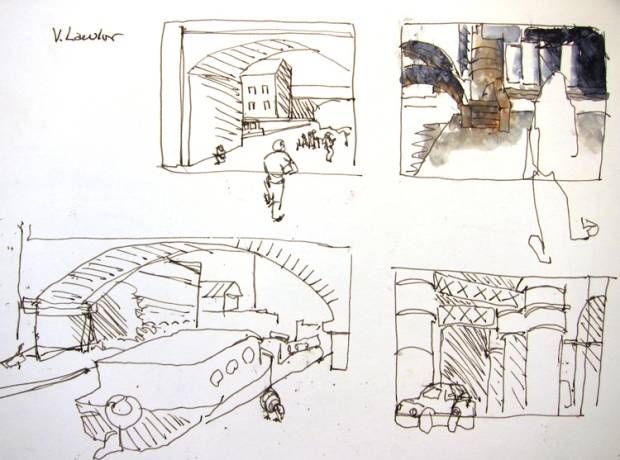 In the afternoon another double decker bus took us out to the canal area of the city for a “Puzzling Out the Picture” workshop with Veronica Lawlor, author of One Drawing a Day among others. The rain followed us there and remained for most of the afternoon, but at least there were bridges to stand under.

We were to think of the picture space as dimensional with things entering and exiting and moving in directions, and start by composing thumbnails. 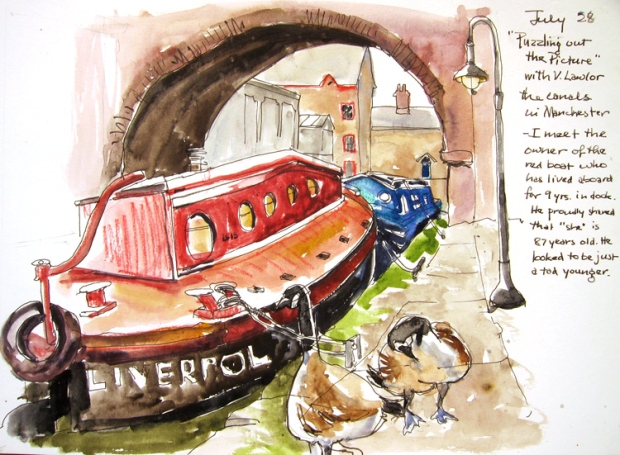 Eventually I was able find a spot where I could sit long enough (in a bit of drizzle) to watch a dimensional story unfold – to have a conversation with the old guy who’s lived on the canal boat for many years and the geese, who periodically marched right up to me and shrieked/squawked at me in argumentative tones (I’m guessing they were expecting food ).

Next morning was the Fred Lynch workshop, “Hunting and Gathering: Sketching Vignettes and Lists”. Fred kept us extremely busy for the 3 1/2 hours capturing quick vignettes and visual lists. “A vignette is an irregularly shaped image on a page that isolates and focuses attention on a particular subject.”

We had only minutes to go out and find a subject and do a vignette. I got this one done before another cloudburst. 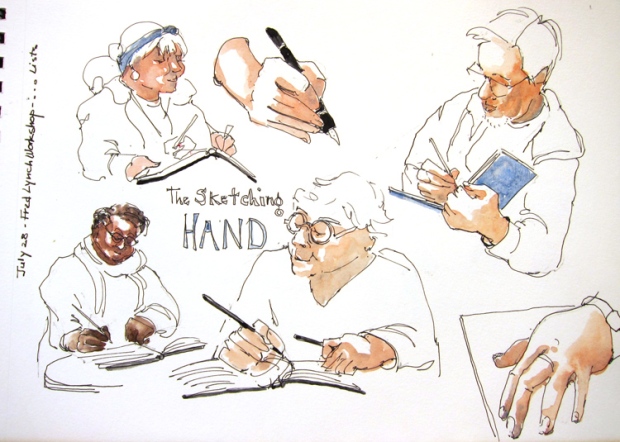 and decided to stay dry inside for the exercise on sketching a page of a Visual List, an arrangement of objects that make a singular statement. There were plenty of sketchers inside the great hall of the school, and I became particularly fascinated with their sketching hands.

The vignette format lends itself so well to the quick capture type of sketching which tells the story of a place and time. In my experience there is rarely time to do a finished sketch but it can be so satisfying to include what is most interesting and design out the rest!

Next: the final days of the Symposium and Ireland/Manchester adventure!