It’s always good to start the day with a laugh! Tania and I were embarking on our third full day in San Francisco spent walking, sketching (me), photographing (Tania), talking to people along the way (mostly Tania) with some eating and drinking thrown in along the way. I follow her lead since she’s the one who has lived in the city off and on since childhood, but when I see a great place to sketch, I plunk down wherever for 15-20 min. and she starts talking to people and doing her marvelous street photography. We started the day where she lives, at the Ghiradelli Square area of Fisherman’s Wharf, walked down the Embarcadero to the Ferry Building, then west through the Embarcadero Center to Chinatown and north through North Beach back to her home.

Tania remembered the arcade and Laughing Sal was the star, so we headed into the Musee Mecanique first. Tania loaded coins into Sal so we could enjoy her belly laughs which shook her ample figure! 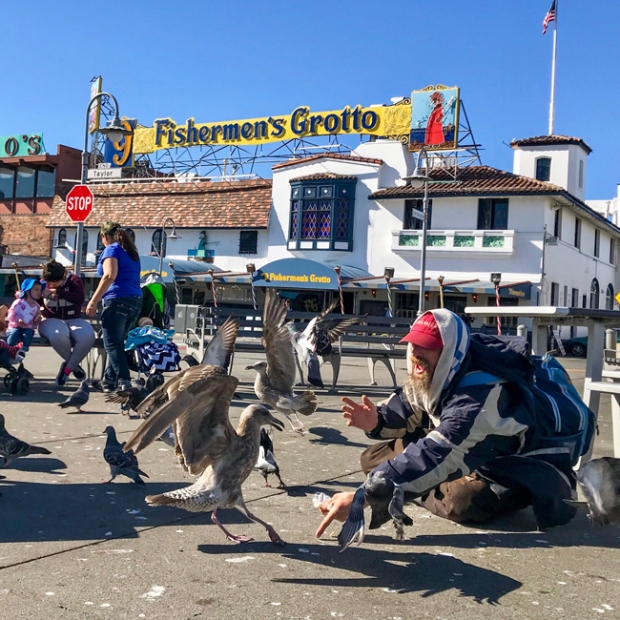 Then the gulls got jealous and wanted part of the action! 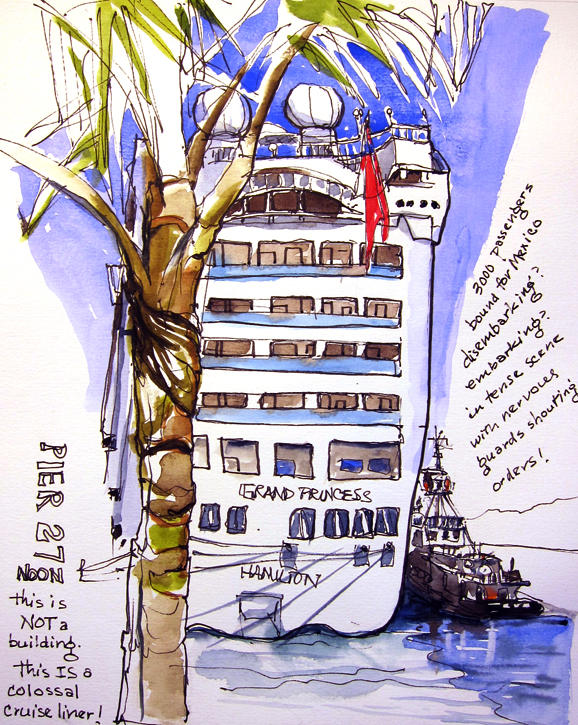 As we proceeded down the Embarcadero there were suddenly lots of brightly dressed security guards with caution signs keeping people away from the cruise ship. I wondered about all the ruckus til I found out there were 3000 passengers who were hitting the street at the same time! Never having gone on a cruise of this sort before I was agape at the size of the ship, which looked like it could contain the residents of a small city! So while we were waiting for our lunch date friend to show up, I got a weird angle view. That’s the S.F. Bay there on the right.

After lunch we went inside the Ferry Building, a spectacular structure that among other things houses a daily Farmers Market-like offering of mouthwatering local delicacies. Committed sketcher that I am (and of course my stomach was already full after feasting on fresh sea scallops for lunch) I declined to eat/shop and took the opportunity to try to get the scope of this interior, something that many urban sketchers would find elementary. But yikes! Impossible! Tania (front figure) made a selection at the  smoked meat counter so that I could have a model.

That was already feeling like a pretty full day, and it was getting hot, but next we walked through the Embarcadero Center to Chinatown and Portsmouth Park. On this gorgeous, record-breakingly warm winter day the park was overflowing with Chinese community members sitting in groups, playing games, enjoying the sun and even. . .having a music lesson.

The teacher here on violin was playing lovely, western sounding music that I could not identify but certainly enjoy. Meanwhile the lady in the pink hat, holding a tiny microphone attached to a red “purse” which seemed to disgorge the sounds into the park sporadically and at an alarming volume, was singing something that sounded more traditionally Chinese, or to my ears more like a high pitched screech.

A rather down-and-out looking character sitting next to us clapped enthusiastically whenever a song was finished. I couldn’t help thinking that this lady was a brave soul to expose her voice lessons, which seemed challenging at best, to the entire Chinese community! We had to interrupt the lesson to meet them and share the sketch. 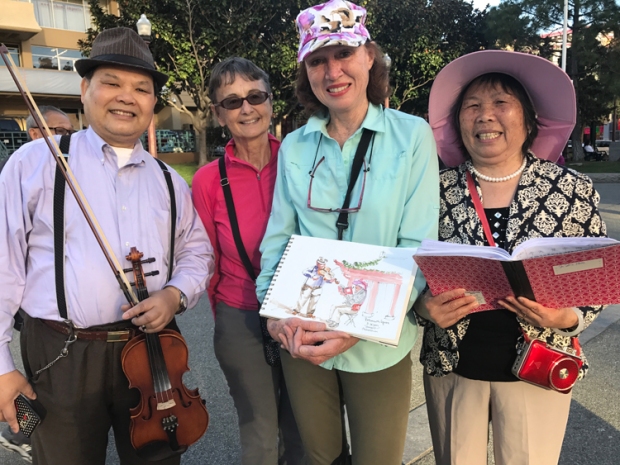 And of course they were so friendly and wanted lots of pictures taken with us. This is one of the very best parts for Tania and I about doing these “Flaneur” days where we become “passionate wanderers”.

A walk back to Tania’s home, stopping briefly to share a glass of wine in North Beach and our day’s adventure, number three in a hopefully on-going series of what I call “Tania Days” came to an end. (You can come along on the other ones here: Day One and Day Two.)

Next day I was beat and had to miss Jazzercise class and sleep in, while Tania was off early for a four hour hike.

About our day Tania wrote: “I needed a day to just wander around and let my mind roam where it wanted.” She’s busy right now preparing for the release of her new book March 1,  Mother Tongue: The Saga of Three Generations of Balkan Women, written under the name Tania Romanov.

Mother Tongue is an exploration of lives lived in the chaos of a part of the world known as the Balkans. It follows the lives of three generations of women―Katarina, Zora, and Tania―over the last 100 years. It follows countries that dissolved, formed, and reformed. Lands that were conquered and subjugated by Fascists and Nazis and nationalists. Lives lived in exile, in refugee camps, in new worlds.

This is a book you won’t be able to put down!