I don’t know what it will take for enough people to wake up to the dire state of our world’s climate change to save us. But it surely was a ray of hope to see our youth showing up and crying out for change at the Climate Strike yesterday. . .  and in no uncertain terms!

I was at the youth rally in Santa Rosa’s Courthouse Square, attended by folks of all ages from groups of younger school children to grandparents. I arrived just as the march from the SR Junior College arrived at the square in a massive surge which filled the street for many blocks. I heard the count – 2000 of them!

The traditional Aztec dancers in the feathered headresses led the way and then performed a ceremonial blessing as the entire crowd formed a massive ring around them. 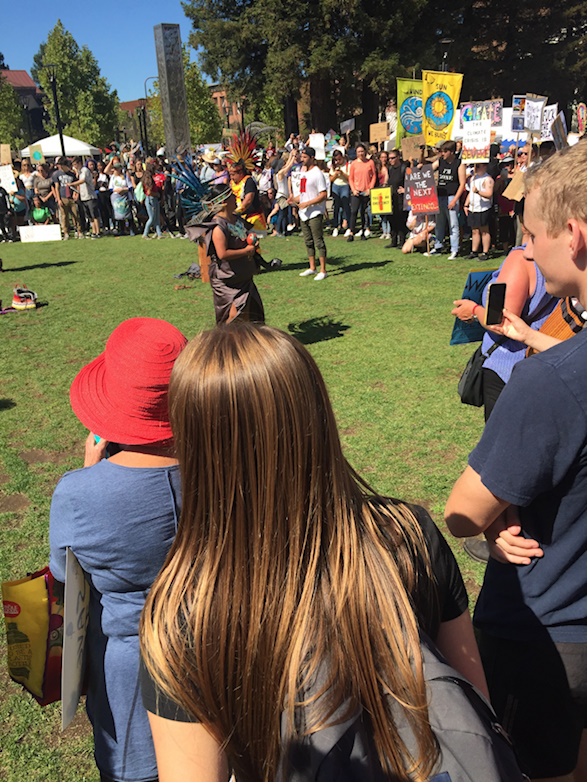 I was there, along with my friends Bettina and Carole to participate by doing reportage sketches of the event.

I wandered around trying to find a vantage point and preferably one in the shade, since the temps were climbing up to the 90’s. I got some of the backdrop roughed in and realized I’d have to stand and do some sketching in the sun or standing in the thin shade of a telephone pole! But little by little I filled in pieces as I found them.

While standing in the crowd a woman about my age came by with her sign and said to me, “I’m not liking this agism thing going on!” I guess she had probably been demonstrating on Earth Day and such for much of her life and didn’t like the invasion of the young folks. Meanwhile I was thinking this was the best sign possible!

One of the speakers, all of whom looked like high school and college age (and one middle schooler), said “We were raised by the generation that said ‘we won’t be there then.'” (meaning when life becomes unbearable on this planet)

Of course I’m one of them, who at least in my private thoughts have heard that selfish statement come up. But we all need to hear these young people and feel their distress as our own!

At the Global Climate Summit march last October we interviewed active participants and sketched their stories to provide a different kind of coverage of the protest. A collection of these climate stories was created.  You can also see some of my sketches and pictures from the event in San Francisco here.

My friends and I were hoping to make contact with some of the young speakers in order to do some sketch stories. So we hung out by the podium and were lucky to “enlist” two high school seniors who were charismatic speakers and leaders in the youth movement, Natasha and Annabelle. And as a bonanza they turned out to be good friends of many years as well.

So sitting in the generous shade of a tree, Bettina interviewed them while I sketched portraits and Carole sketched on fabric, which will become a fiber art  protest piece. The girls warmed to the task, and we were charmed.

We asked them to speak about their personal fears about global warming, but they were also very tuned to their “mission” about climate change.

This was not the first time I’d heard young people say that they felt it was not fair for them to bring children into this world. That’s particularly hard for me to hear as a someday hopeful grandmother, but I certainly know where it’s coming from.

One can get quite depressed thinking about what we human beings have done and are still doing to our planet. But these youth know they don’t have the option to be inactive, and they are highly motivated to vote. So look out climate-deniers! The youth wave is coming.