Earlier this month I attended a Dance Party. Now before you freak out. . .it was another virtual event, meaning you get to dance by yourself pretending that you’re not. Although I actually enjoy knowing that no one is watching!

But it wasn’t even a Dance Party, but rather a sketch meet up organized by my friend Laurie Wigham of the SF Urban Sketchers group. The rest of the event title was Tiny Desk Musicians, which conjured up miniature people standing on a desk making music. I had to try this!

And it was better than I imagined. The Tiny Desk Concerts from NPR’s All Songs Considered have featured fabulous musicians performing live at Bob Boilen’s desk in the NPR Music office.  In our Zoom meet up, after introducing ourselves we broke out for an hour to sketch from the video footage, picking the groups we liked and sketching.

I did indeed have to dance for a bit with Cima Funk. I LOVE Funk and these guys had it going on, and they were so much fun to watch.

Another favorite for listening and sketching was the Tedeschi Trucks Band, with a female vocalist and blues, jazz and more.

Bomba Estereo was not my choice of music but the singer with the orange hair and oversized white glasses was irresistible, visually speaking.

And as I was getting tired, I attempted one more, and was so mesmerized by the music, that I just kept painting and painting, trying to deepen the dark skin tones until I think I overdid it. What to do? Splatter paint, of course.

Did you see the skies yesterday?! It was a spectacular jaw-dropping show yesterday morning as I drove into San Francisco through mist and fog and rain and sparkling sunshine and every kind of cloud drama.

I was there for an urban sketcher teacher meeting, sketch meet up and party at Arch Art Supply Store. A pretty significant downpour was perfectly timed for our sketch meet up. But these SF Urban Sketchers, many of whom have been meeting to sketch outdoors for years now, were well prepared and unphased by the cold and rain. I headed over with some of the group to Big Daddy’s Antique store, an open emporium  of fabulous furnishings grouped in living area scenes. No heat, but at least shelter from the rain!

After an hour we headed back to Arch Art Supply for a celebration of 7 years of SF Urban Sketcher meet ups. In the capable hands of Laurie Wigham the group has grown to about 3200 members and hosts one or two meet ups in the city every week, as well as the 10X10 Urban Sketcher Workshop series which I will be a part of again this year. You can download the entire workshop flyer here. And if you want to join some SF Sketchers events you can sign in on Meetup.com

Arch Art Supply is our generous sponsor and was the host of the party. It is always fun to shop there for sketch supplies. I can hardly believe this, but I actually brought home a sketch palette set up that I had never seen before! (I mean I think I have a collection of every other one ever invented.) I’ll share it here at some point after I have tried it out.

My father, being a hunter, liked rifles. So when I was little he let me help him make bullets, weighing the gunpowder before putting it in the cartridge and sealing it in some kind of contraption. That’s my memory. Later, when he tried to teach me to use a real gun, I was repelled. And now I am repelled by the accessibility of firearms in our society.

But here I was on an absolutely spectacular day in San Francisco, right beneath the Golden Gate Bridge at Fort Point for a meet up with the S.F. Urban Sketchers. History Day at Fort Point was a staging of Civil War era activities, enacted by costumed history buffs, with an weaponry and soldiering drills. 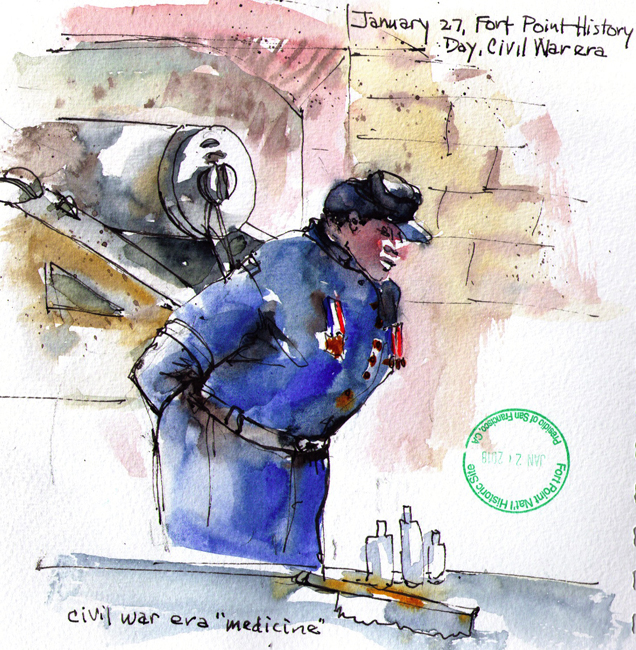 This soldier was exhibiting Civil War medicine. Note the saw for removing limbs, so the gangrene didn’t kill the soldier, I assume. I was trying not to listen.

There was a lot of standing around and looking military, with the weaponry clearly displayed. 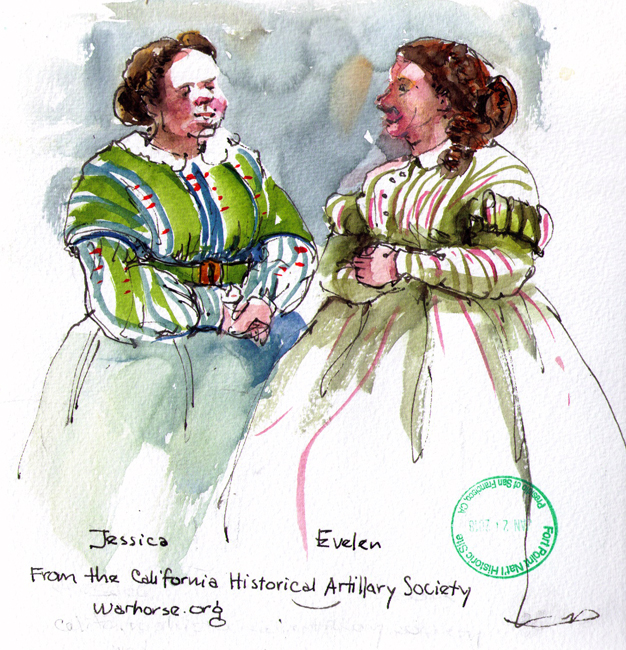 Since the actors had mostly ornamental tasks that day, we asked these two ladies if they would pose, and discovered they were a wealth of information about the Historical Artillery Society they belong to. Evelen is normally in the uniform of a male soldier on manuevers, hauling the canon onto the field on horseback. Be not confused by their interest in war history – they are both pre-school teachers in their day jobs! 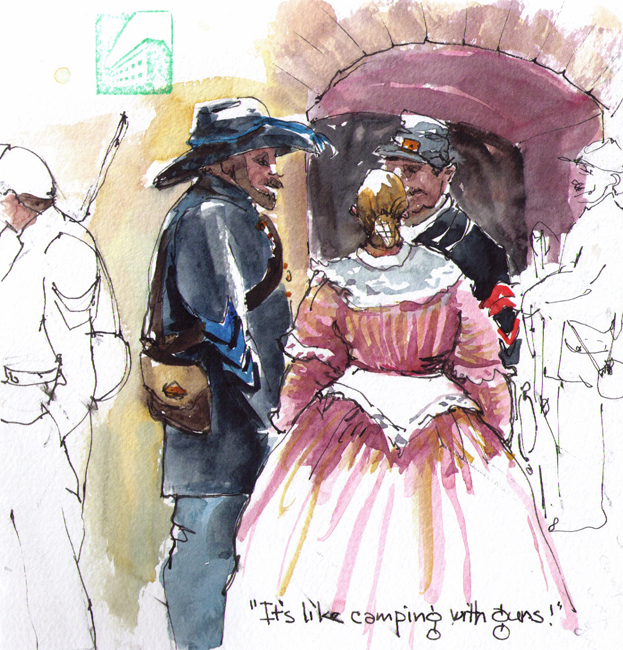 ‘While sketching this group I overheard a recruiter talking to some interested visitors about the society. Apparently you can join them on one of their history days, borrow costumes, camp out with them in tents. “It’s like camping with guns!” he said enthusiastically. 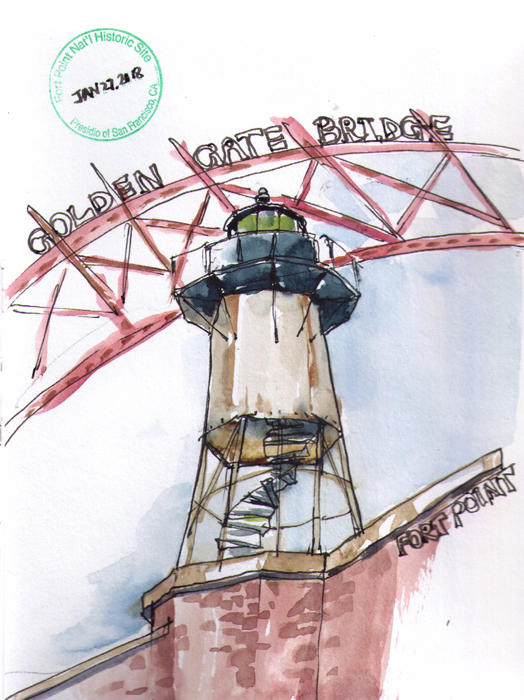 I was getting a bit weary of sketching soldiers and looked up at the water tower and through the lattice of the Golden Gate Bridge. 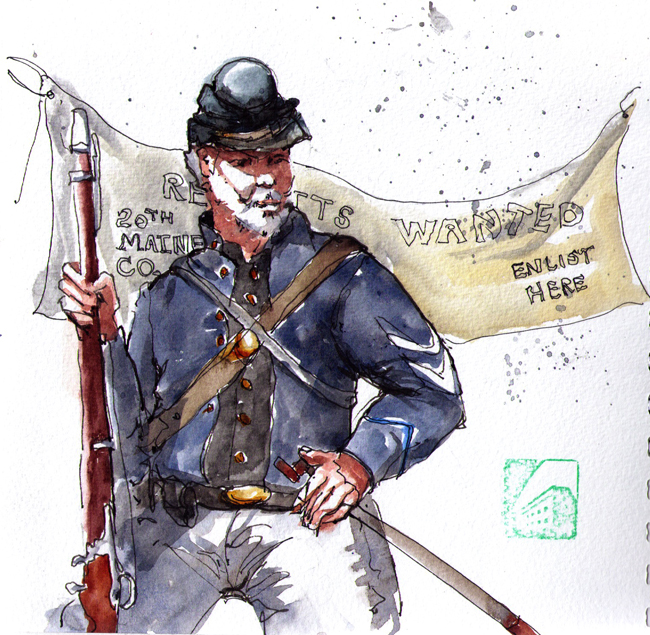 Then back for a last sketch of this soldier enjoying a sunny spot. There were only Union soldiers here in San Francisco. The war ended before the fighting ever got here. But I got a bit of a taste of the soldier’s life on this day. More than once I looked up from my sketchbook to see a formation of soldiers following a drill that resulted in my facing down (unloaded) rifle barrels. Hopefully I’ll never face down the real thing! This one was enacted in all seriousness, and yet also, all in a day’s fun!

The S.F. Urban Sketchers met at the Oakland Museum yesterday. It’s a bit of a schlep to get there from Sebastopol, but so worth it! Since I lived in the East Bay for sixteen years, I know how to navigate the crazy knots of freeway pretzels to get there.

Once at the museum you are treated to three levels of engaging exhibitions and interactive installations. It was free admission day and well attended by families with strollers and children of all ages. And the sketchers turned out in numbers.

This installation is hard to describe – like one of those bouncy houses for kids’ birthday parties, only not for bouncing. The colors were gradually changing and you could walk through the big spheres. (No paints allowed in the museum exhibits, so the watercolors were added later.)

It was hard to capture in a sketch, so I did this one when I got home and it seemed a bit more accurate.

Level 1 downstairs was a goldmine of taxidermy animals! I believe I could have stayed there for hours and maybe days! While in a trance trying to get the raccoon’s hands right, I heard a small child say something to his father about the drawing and felt him breathing down my neck. The father said “Sure! When we get home let’s get out your marking pens and you can do your own drawing of the raccoon!”  I thought, yeah, that’s one of the reasons we sketch in public.

The dioramas were so dramatic! You’re not likely to run into this kind of animal action outside of National Geographic TV. 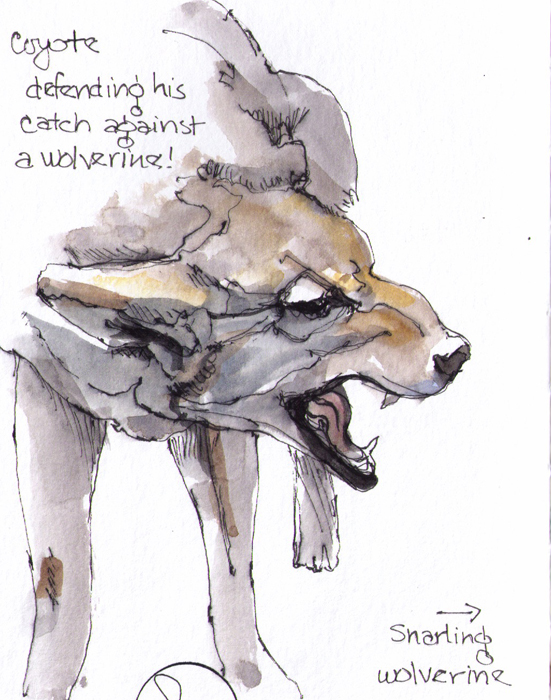 Going for the snarl here. 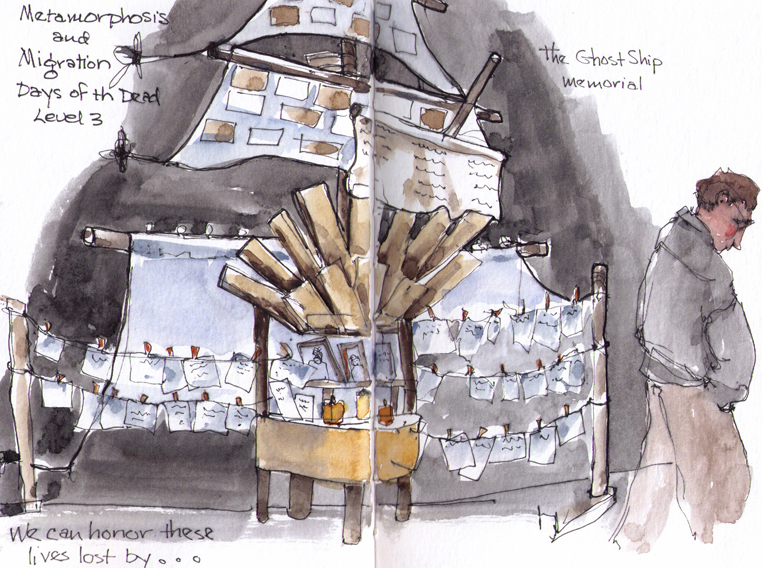 This haunting installation in recognition and remembrance of the people who lost their lives in Oakland’s Ghost Ship fire of a year ago was linked with the Day of the Dead and butterfly migration/metamorphosis exhibits. After sketching this I met a boy at the origami butterfly table and we helped each other fold paper butterflies.

The meet ups always end with sharing our sketches. A large enthusiastic group of old and new sketchers assembled in the cafe to meet, see each others’ sketches and share ideas. What a fun way to spend a Sunday!

A lovely cold but sunny day in San Francisco last Saturday for an Urban Sketcher meet up at Grace Cathedral. At the top of the climb up to the Cathedral I was immediately rewarded by a sight more likely to be seen at the Sonoma County Fair! 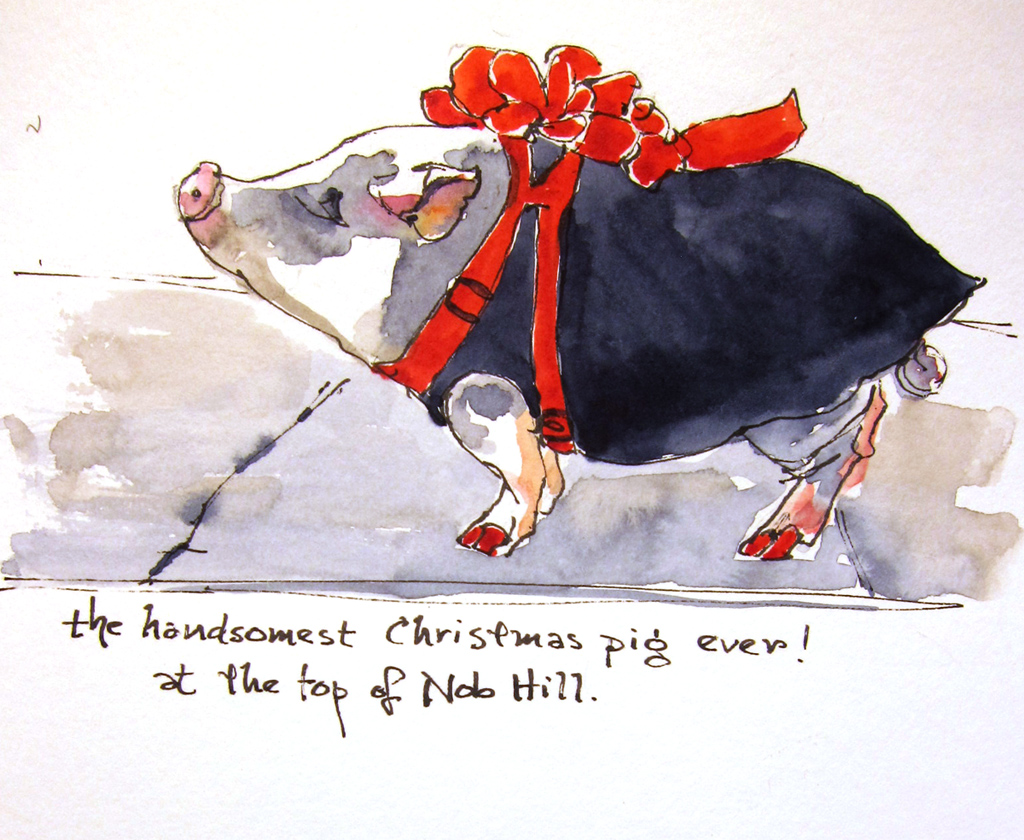 Such a regal presence was this distinguished looking character with his(her) red painted toe nails and immaculate grooming that any derogatory terms often used for swine would not apply in this case.

Once inside we were told that we had 30 minutes before we had to leave so that the choir could rehearse and set up for the performance. (I caught a picture of this young elf clearing away the set from the family program that had just ended)

So I plopped down in a pew and started madly sketching until I realized the confused state of my arches. There were simply too many! It was a bit like sitting down to a feast when super hungry and eating so fast that you get indigestion. 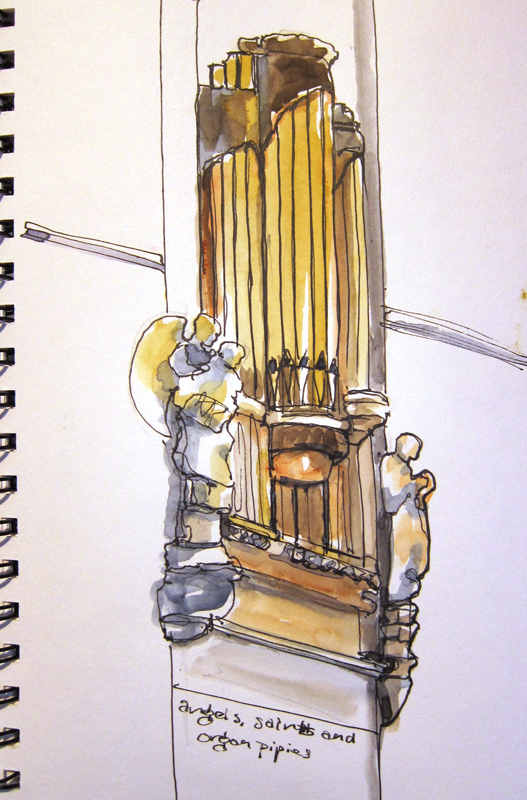 The inner voice said “pick something simpler and more contained” so I tackled the angels, saints and organ pipes.

Then we were asked to leave and went across the street to a sunny spot to tackle the exterior.

It wasn’t until later that I realized that the J and the Y on the banners, along with the rose window in the middle spelled JOY!

After we’d stayed for the concert and heard the angelic voices of the Men and Boys Choir, accompanied by organ and orchestra, we floated back down the hill again on a wave of that joy.