If you’re up for it, I’ll take you through the machinations of a mind steeped in the mysteries of Muse-ing, which is no other than common ordinary imagination set free with almost unlimited art supplies at hand! I’m tuning up now to teach my first in-person Muse Group since the pandemic started, and at the mere though of it the wild horses of imagination are off and running at breakneck speed. Woooo boy!

I could have stopped there, but wanted to have some more mixed media fun. In a magazine I found a vessel and wanted to fill it with something. The underpainting was not cooperating with this new plan, so I unearthed some acrylic “skins” (dried poured acrylics) and started cutting and finding shapes. I wanted a story to evolve, but this took some time, moving pieces around, discovering the lucky accidents of small pieces which could be put together into abstract bird shapes. Then I got stuck again and decided to try to write about this evolving story and see what it was about.

Finally I had my story but needed the separate parts to hang together and talk to each other visually. So back to the collage to find some screen material, one of my most favorite collage materials! The bottom needed anchoring with more black acrylic, but in a way that harmonized with the circular swirl of marks on the page. Some of the black screen needed painting with the white gesso to show up against the dark segments. I was in pure design mode.

And finally the voice said, you can stop now. And there you have it. You may have stopped much sooner, and that would have been “right” too! Here’s the final version of my writing, tweaked for external consumption. Although it’s not specifically mentioned here, you may find yourself making the connections with things going on in this time of proximity to election day. I certainly did.

These eggs of questionable parentage

Even the solitary high flyer could not make sense of it

Too weird he shrieked, dropping feathers

In his haste to exit the scene

He could not help but catch sight

Of the curtain rising

On the most bizarre show of all

I hadn’t done a rorschach blot painting in a long time. You know, the proverbial inkblot that psychologists have used to diagnose patients by listening to their answers about what they see in the inkblot. Rorschachs are a great way to project your imagination onto the screen of your paper. In more abstract, expressive painting sometimes it’s hard to get started. Not so, when you start with rorschach play. I always find my mind kicking into high gear with hallucinations, ideas, stories, and occasional wisdom. Here’s the latest.

They were doing a little dance, like children do, or maybe there were playing hopscotch. I don’t know. And as the sidewalk heaved up between them, a golden light escaped from below. A veil had lifted from their eyes, and they gazed down bewildered, and maybe a bit bewitched, but in a good way.

Meanwhile wise ones, taking their measure of the children, sent their emissaries, in readiness to draw the veil again if some mischief arose.

But the two tiny characters became fearful. Are we allowed? they asked. And there was at first no answer.

Then they heard it, a crackle and a hiss, a snap and a pop. That was it! They ran away shrieking, leaving the pots of treasure untouched.

And so it is for us all, that we fear those treasures which wait for us to find them, meanwhile searching in all the wrong places.

Would you like to try a rorschach of your own? I recorded a three minute demo today to show you how.

The Walbridge fire near us, the one that evacuated us, still burns. Many have lost their homes, and we will mourn with them, even while experiencing relief that most evacuations orders are lifted and the fire perimeter is holding.

I’ve heard from many of my friends that we are all weary of virus and fires and of smoky air that keeps us inside. We are unable to breathe deep and have feel that “it’s over now”.  And we probably have three more months of “fire season” ahead.

The last two days I’ve turned back to my mixed media, expressive, intuitive Muse art to help me deal with those feelings that the mind has not been able to keep up with.

I grabbed a new bottle of black ink and as I dropped, splattered, smeared and scraped. . .

the words “ashes, ashes, we all fall down!” kept popping up. Hmmm. . .a nursery rhyme. Remember?

Ring around the rosies

A pocket full of posies

We all fall down!

So I decided to research the rhyme and here’s what I found! Ring-a-round the rosie (probably in the Great Plague of London in 1665) referred to a red circular rash common in some forms of plague. The posies would have represented the different flowers and herbs people carried to ward off disease. The ashes or a-tishoo and falling down was supposed to mimic sneezing and eventually dying from the disease.

It seems that fire and plague have joined hands again!

And so I did another on the same theme, with the rosies/posies and ashes and that red orange we’ve seen on the horizon of late, either at sunset or sunrise, tinting the sun and the moon.

Rosies and posies, fire and plague. No wonder I can’t get the mind around it. But art can.

Inspired by a poem of Rumi and an interest in playing with translucent papers in some way, I folded tissure paper accordian style and wrote a line of Rumi’s poem on each fold, then secured it in a pouch. Oh, just a lot of fun playing with materials on a lovely rainy spring equinox day with my delightful Muse sisters. 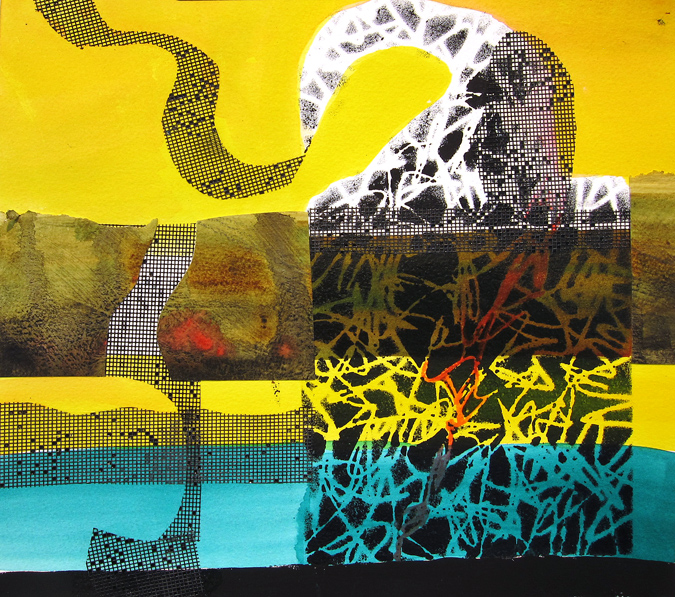 It’s a trail leading somewhere; the campaign trail or a spelling bee or a swarm of bees. I am caught in the tangle of it, looking for meaning, not finding much. Best just to step in and hope for the best, accepting whatever comes.

For many years I was strictly a watercolor painter and I thought that only watercolors could give you the beautiful transparent color, where the light goes through the color glaze, bouncing off the white paper below.

However acrylic paints run the gamut of transparent to opaque.  In this lesson we established some bold black on white shapes and then glazed transparent acrylics over to get the astonishing effect of color transparency in sheer color notes. Most paint companies let you know which are the transparent pigments. Golden Paint spells it out in two ways on the bottle you buy!