Rocca Maggiore, the fort above the town of Assisi

After the visit to Florence, Assisi and environs felt more manageable, more familiar. I was working my way through the sketchbooks Bob had made me. 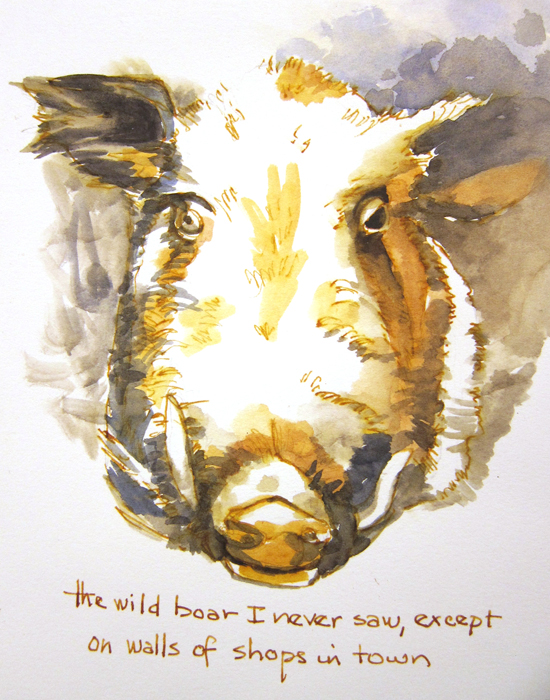 I still hadn’t seen one of the wild boar on the mountain, but they didn’t surprise me when I cam upon them in town.

I visited the Porziuncola, St. Francis’ first mini-church, around which was built the magnificent Santa Maria degli Angeli basilica. Consecutive Masses were going on inside the small church and outside in the larger church as I sat in a pew sketching.  My strong preference was for the smaller church, which held the energy of St. Francis, but only a few people could fit in it at a time.

One evening we attended a choral concert in another local Franciscan church.  The program was varied, covering many centuries of devotional music. I sketched for a while before floating off with the angelic voices. 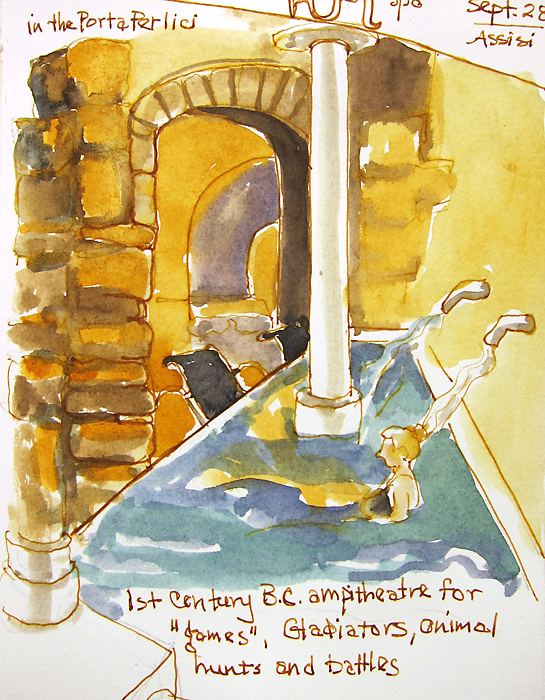 It’s unusual in Italy to find historic edifices which have been significantly modified for other purposes.  The rule is usually “restoration” rather than “remodeling” or, heaven forbid, demolition. But at the top of the town of Assisi lies a Roman ampitheatre, built circa first century B.C. which has been partially taken over by a Spa called Nun. So to see the ancient stones, we had to surrender our bodies to the steam bath and sauna with adjacent ice room, jacuzzi and mineral baths, showers and massage jets, and the exquisite tea room with soft illumination of ancient stone walls.  Oh well, the rigors of travel, you know.