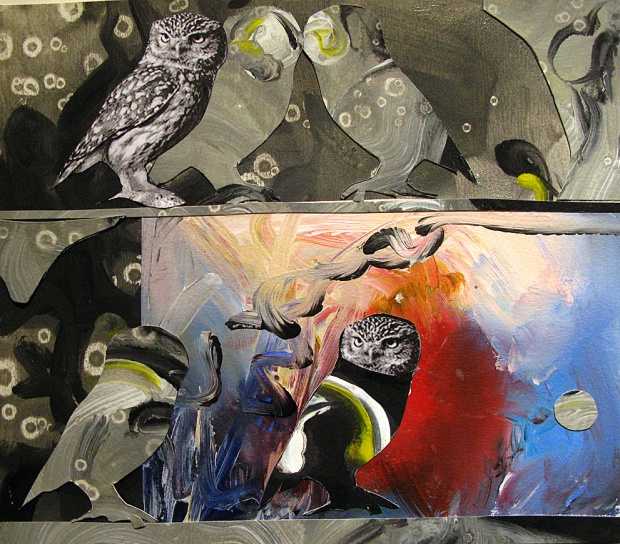 On a dark night I chanced upon an owl and wondered.  What message of owl wisdom had I invoked?  Was i seriously in need of a course correction?  Had I splintered off into a mine field of errors?  Too much arrogance perhaps, or a fearful spinelessness. . .it could be either.

While I pondered so, a vast assemblage of hooting sages appeared, arriving like the stars to remind me finally, that I live in their world and not vice versa.

If you want to think out of the box with your paintings, try cutting them up.  That’s what we did in the Monday Muse Group.  I started with three paintings, two dark and one more colorful and the words “on a dark night” came to mind.  So I hunted for an owl picture and did some cutting and gluing.  I don’t think one usually finds “flocks of owls”, but perhaps owl spirits?

P.S.  There’s a new weekly Monday Afternoon Muse Group starting in January at my studio in Sebastopol, California.  There are still a couple spots left.  If you’re interested in joining us, visit my workshops page.