On Saturday we met up with the New Orleans Urban Sketchers at the Historic New Orleans Collection  in the French Quarter. I must admit that another museum was not what I would have chosen on a sunny day in a city with so many sights to see. But we were welcomed with a heady combination of southern hospitality and urban sketcher friendliness. We were given a lovely sunny courtyard with French Quarter architecture and a history-savvy docent, away from the tourist-choked Royal St. outside.

By this point I knew better than to spend my time with the frustration of ornate balconies and walls of columns and shutters, and picked the vignettes that told my chosen story. The scent of alyssum and violets behind the curtained window afforded flashbacks of my mother and grandmother.

For those of you who are sketchers, my sketchbooks were hand-sewn signatures of CP Fluid 100 paper which later will be bound in a book. The above size is the smaller, 7.5X11″ when open, as above.

When we emerged again onto Royal St. we were hungry, but wandered a while, checking out the shops devoted to Mardi Gras, wild hats and jewelry, and hot sauces before settling on the Royal House for lunch.

Then back to more of the History Museum. One thing I learned from a week in NOLA was that my taste for history had not been totally destroyed in school by chapter books and memorized battle dates!

One sign in the exhibit: in a life sized picture which put the viewer in a seat in one of the early trolley cars: DEATH RIDES THE HIGHWAYS, BUT YOU ARE SAFE IN THE TROLLEY CAR!  Ironic that in the day of the Corona virus one might feel safer in ones car  on the highway than in a trolley car.

And then one of the high points of the trip, the street musicians I’d hoped to hear, and in particular Doreen, who could lean back and blow that clarinet with every muscle and cell of her body and make you want to weep with it. That’s her husband on tuba and daughter on drums. Standing across the street in a crowd I managed to draw this and paint it later.

She had glittery blue braided into her hair. Afterwards I shamelessly asked for her picture, and tired as she was from a long session on the busy streets, she beamed that warm smile. 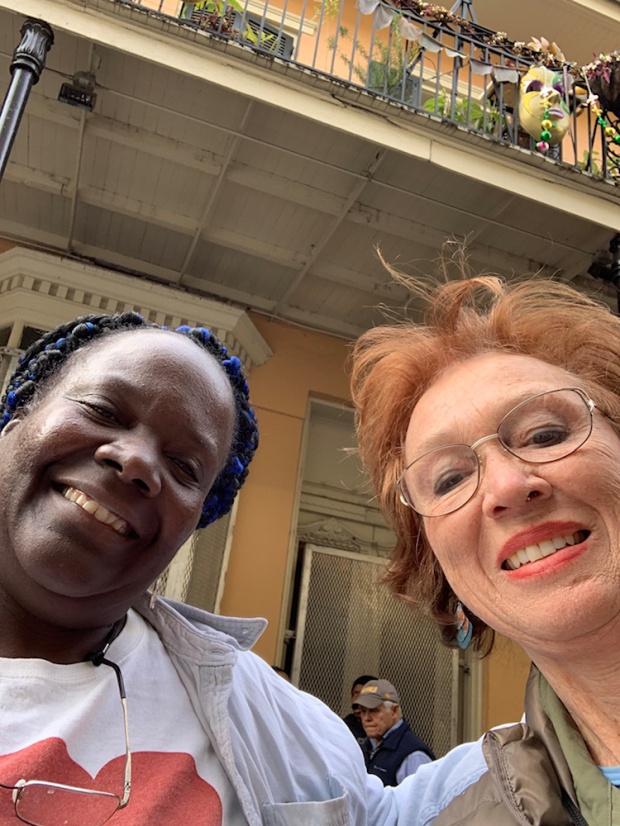 Note the vestiges of Mardi Gras on the balcony above, which one finds everywhere in the city. As we walked the streets of the French Quarter there were small marching bands and processions on every other street “celebrating” funerals,  weddings, and who knows what! When we reached Bourbon Street, where the amped music flooded the street along with liquor that permeated the air, we headed home.