The black and white gecko from my dream last week finally spoke, and just in the nick of time. How does that work? Well, you sit down with a pen and paper, focus your attention on it, and ask it to speak. Then you take dictation. Of course you have to assume the spirit guide has manifested in your dream and in the art because it has a message.

So with paper and pen before me finally Lizard spoke and I wrote.

“Lay low and listen, to music that soothes and restores. Fill your eyes with images that look past the doom and bitterness that still brews, to the fantastical carpet of green velvet and scarlet mushrooms and the visual cadence of shapely trees and bare branches. Feel the warmth of your own skin inside cozy layers and fresh cold air spicing and refreshing your breath, clearing out cobwebs of thought, and making room for a deep contentment beyond all the distressing rumblings of bad news.

Lay low and listen. Be ready to act in a heartbeat when the time is right. Attune with every sensor in every cell of your body, even to the littlest toe. Feel the drumbeat of upcoming events there. . . . and there, but be not alarmed. Embody readiness, and if a tail must be lost, fear not, for you are a lizard and can grow a new one!”

Later that day I watched as the insurgents stormed the citadel in Washington. By the next morning the tail, which had been lost, was already growing back, stronger than ever!

There’s nothing like an ink splatter to activate the imagination. Actually, now that I think of it, this approach birthed Imagine with Art, this blog that’s continued since 2006, and the Muse Groups I’ve been teaching for almost that long. Play around with inks and pretty soon you’ve got a story going, whether it’s the rorschachs or the drips and splatters.

And it’s fun too! In fact when we did the splatter lesson in Muse Group this week we were so totally engaged in what was happening on the paper that I thought we could really do several weeks of this. I can always tell when total engagement happens because you don’t see people staring blankly at the paper and wondering what to do next. (Well that did happen to me a few times, but I think maybe I was the only one.)

The suggestion was to use the splatter and possibly spraying with a mouth atomizer and then see if any creatures or other unsuspecting images appeared.

He was just minding his own business, doing his usual foraging for vegetarian fare, when they spotted him. . . the dive bombing Tangerinos. He had no time to flee before the first one landed on his back with a big wet splatt! It wasn’t so bad really, as it did smell rather tasty.

Later as he met up with his buddy bucks, they had fun teasing him about his edible “crown” that dripped down his cheeks.

And the creatures keep coming. . . 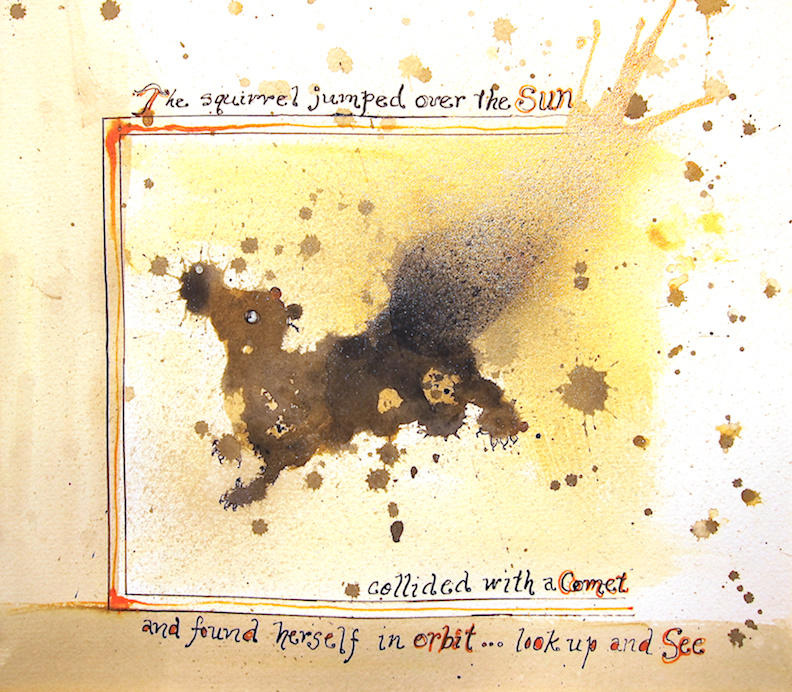 Actually the squirrel with the rather large proboscis at first seemed to be jumping over the moon, but when the gold paint made an uninvited appearance (and a few expletives came to mind!) the narrative changed. These creatures do have a mind of their own.

If you want to enjoy some more brilliant silliness with inks you might like this short video of Ralph Steadman, my latest art hero.