This is a belated postscript about the 10 X10 Urban Sketchers workshop I taught May 26 titled “Sketch the Vignette”. I was drawn to this topic because I have a habit of getting carried away and taking on too much in my sketches. Designing the vignette keeps me disciplined by isolating the main subject and focusing attention on it.

I like Edgar Whitney’s definition: “A vignette is a piece of subject matter in a well designed piece of white space.”

We started by warming up in my favorite way with continuous line drawing. Keeping the pen on the paper is the best way I know to track your subject without losing your place!

For the workshop exercises we spread out in a one block area in Petaluma where there’s lots to sketch, both inside the Old Petaluma Mill and outside. Some sketchers picked the river and old railroad ties and bridge, to the right of this picture. The first exercise was to find at least five subjects to focus on, doing a quick capture sketch of each and naming them. This helps to commit to a focus so that you’re more likely to stick to the point.

Then students were encouraged to place the subject matter in context and design the white spaces around the subject by identifying interesting edges. 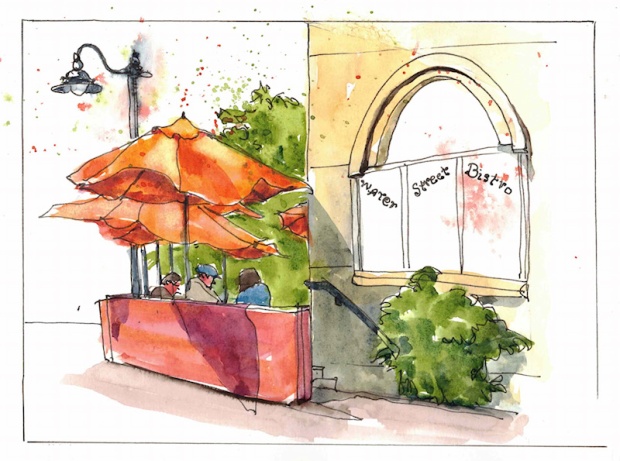 Lastly we accented the sketch with color. I did a demo of this spot which I love for the colorful umbrellas (also the food!) while students observed, so we could also discuss watercolor application. Also we discussed rationale for what was left out of the sketch. This is often as important as what is put in. The name of the restaurant on the window was important, but I didn’t do any other detail on the window to not upstage the patio eating scene. The street lamp made for a more interesting white shape.

And then there was the final splatter! which everyone loves to do because it gets the eye moving and makes the scene more active. There was some interest in learning how to do it with control, but to me, control is antithetical to quick capture sketching! And I’m also not very good at it.

Where you drive up the country lane outside of Fort Bragg, California to the Garden at Road’s End you are greeted first by this surrealistic natural sculpture in the ferns beneath the redwoods and you know you’ve entered a place of serene beauty. This is where I was this past week, on a solo retreat to have some time to hear the more quiet inner voices that needed some space to be heard. 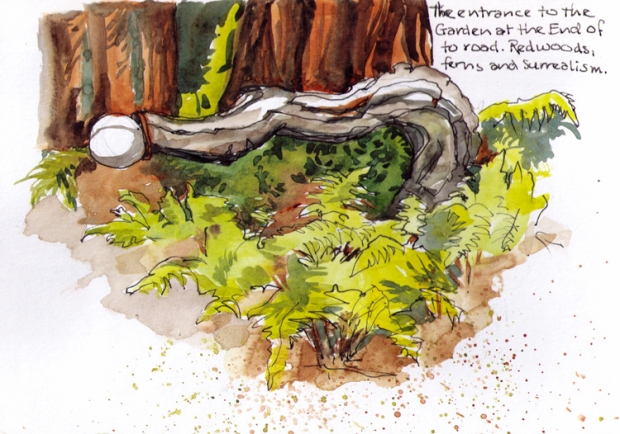 John Calhoun is the host here and has poured his architectural training and master garden skills along with experience running a spiritual retreat into this remarkable Air BNB retreat.

I was ready to do a lot of meditating, writing, sleeping of course and nature walks. Initially the sky was heavy with drizzle so I satisfied my sketching urge inside, with cup of hot tea by my side.

But I was minutes from the choicest northern California beaches, so I bundled up against the wind and rain and headed out to MacKerricher State park and walked along the cliffs. These rock outcroppings with seals and cormorants can be seen everywhere along the coast, but not up close. So, squinting I did my best, but learned that you should always start with the closer figures, in this case the seals, which of course are larger than the birds. But since I could make out the outline of the cormorants I started there. Oh well, you get the idea.

Theoretically there are Gray Whales migrating now off the coast of California. I missed seeing them but settled for this skeleton, finding it particularly challenging to get the right proportions and fit this creature, which is already 12-14′ long at birth, into a drawing 7 inches wide!

Later sketching in some late afternoon glow in John’s rainbow colored heather garden, which upstages even the Botanical Garden in town.

For Bragg is particularly known for its Glass Beach and nature walk along the bluff. The waves were so high that day that it was easy to imagine not only the warned tsunami but the rapid loss of coastline. Fences were erected to keep people from standing too close to the edge of wet loose soil and rock. 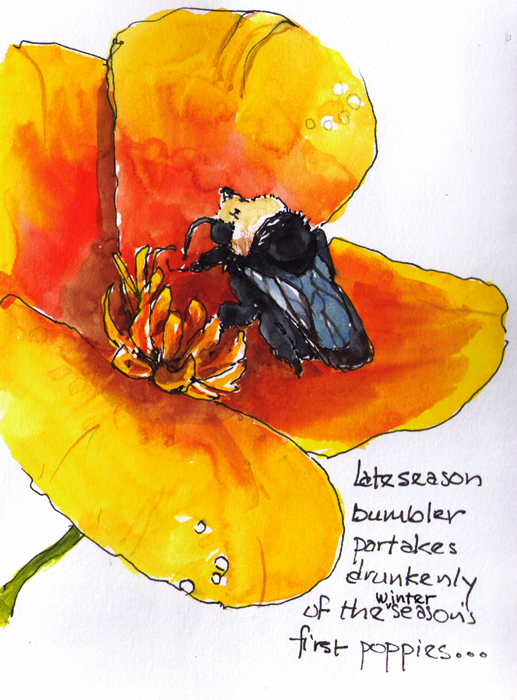 On Friday I stopped at Russian Gulch State Park on the way home to walk the headlands trail. The sun came out and I was treated to the most dazzling display of a winter sea with mountainous waves thundering and exploding against the cliffs into vertical sprays that dazzled blindingly in the sunlight. The entire sea below me was white foam.

Which is to say that I simply had to surrender to the fact that it was beyond my ability to sketch the experience. Sometimes it’s like that. The camera, the video, the brush, all become useless and you’re confronted with the necessity to use all your senses to lap it up and store it away in memory. . .when the time comes to go home.

Which is where I am now, still feeling the ocean spray and the thrill of standing on the edge of such magnificence. In a few years, that trail will be gone as the coast is eaten by forces we are learning more about each day. But the memory will remain.

So many speeches by politicians turn me off, or worse even ruin my dinner. But this week I watched President Obama’s Farewell speech and it went right into my heart, and then found it’s way into my sketchbook. I was also thinking of committing to do a sketch a day for a month (starting yesterday) so this seemed like a good start.

My eyes filled up with tears so many times. Oh dear president, you will be sorely missed! I am full of gratitude for all you have done for the American people.

I think I already have an almost daily sketch habit, but I’d like to share it with you all and hope you will join me and others. Check out the Sketchbook Skool drawing challenge and get started! #SBSADrawingADay Challenge

A lovely cold but sunny day in San Francisco last Saturday for an Urban Sketcher meet up at Grace Cathedral. At the top of the climb up to the Cathedral I was immediately rewarded by a sight more likely to be seen at the Sonoma County Fair! 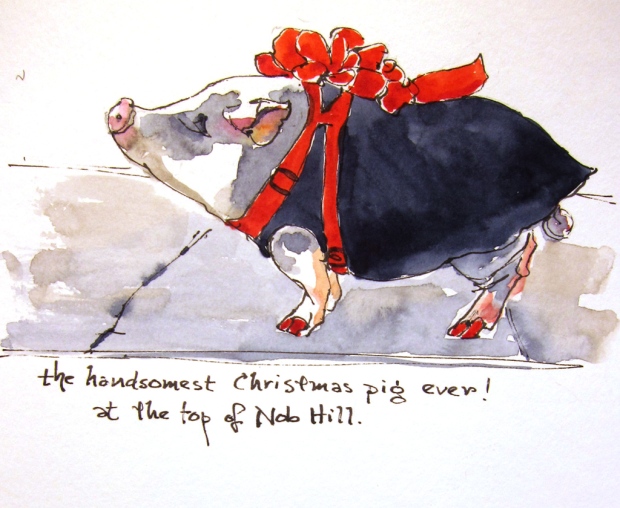 Such a regal presence was this distinguished looking character with his(her) red painted toe nails and immaculate grooming that any derogatory terms often used for swine would not apply in this case. 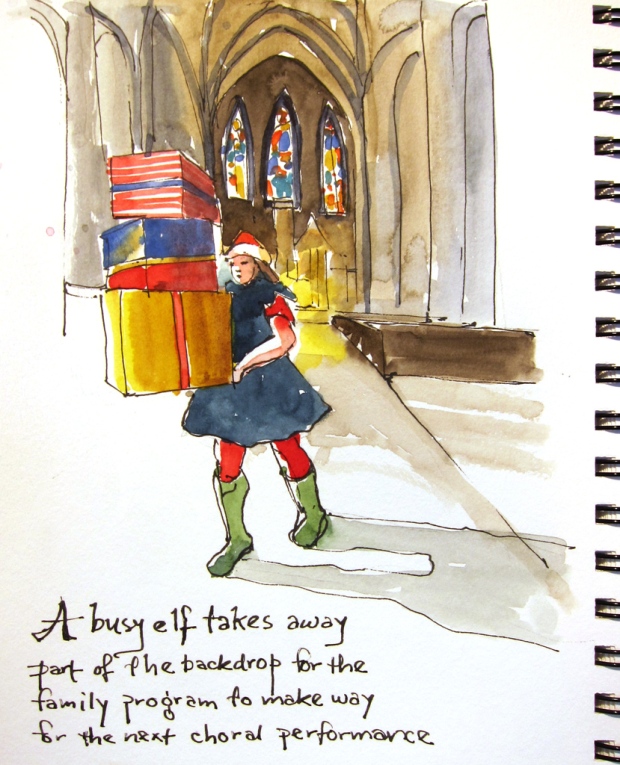 Once inside we were told that we had 30 minutes before we had to leave so that the choir could rehearse and set up for the performance. (I caught a picture of this young elf clearing away the set from the family program that had just ended)

So I plopped down in a pew and started madly sketching until I realized the confused state of my arches. There were simply too many! It was a bit like sitting down to a feast when super hungry and eating so fast that you get indigestion.

The inner voice said “pick something simpler and more contained” so I tackled the angels, saints and organ pipes.

Then we were asked to leave and went across the street to a sunny spot to tackle the exterior.

It wasn’t until later that I realized that the J and the Y on the banners, along with the rose window in the middle spelled JOY!

After we’d stayed for the concert and heard the angelic voices of the Men and Boys Choir, accompanied by organ and orchestra, we floated back down the hill again on a wave of that joy.