The smoke from the fires cleared out mid week, blown cross country and out to sea. Time to get out with a small group of friends and enjoy some on location sketching.

Four of us met up at Presidio Pond in San Francisco, a gorgeous landscaped garden which draws ducks, pigeons, geese and more as well as lots of tiny human ducklings with their nannies and moms. We moved over to the small bubbling brook/falls/stream and I plunged recklessly in, immediately realizing I was in over my head!

When in doubt draw a figure and when you’re with sketchers, there’s always at least one. Later I saw that Laurie had put me in her masterful sketch of the same water feature.

We adjourned over at the Warming Hut on the Marina for lunch and found it closed. No problem since we had bag lunches, and there were any number of views to sketch, from a sunlit city skyline and Presidio buildings, to the fishing dock and the bay with massive container ships and the Golden Gate Bridge shrouded as it usually is in fog.

Back at Pat’s Garden on Friday my friends and I spread out in the various gardens filled with antique farm implements and tools, sculptures and blooms.

I’d been wanting to sketch the rusty windmill, and when I saw the chairs, I decided to define the objects with negative painting and do it quickly since I always seem to overwork my sketches. It got quite complicated and messy, but at least I stopped in time!

With just a few minutes left I found this cement toad on the porch and he was just too cute to pass up. And yes, I know now that I misspelled cozy. It goes with the territory of trying to draw your letters. The right hemisphere (of the brain) rears up and invents new spellings.

I’d planned to sketch at Sebastopol’s Apple Blossom Festival last Sunday, but it was hot and when I thought of the crowds and my lovely cool garden at home, the plan changed. From my chair on the patio beneath the redwoods there would be no musicians to sketch, no lively festival activities. Just the same old house and garden I look at every day. But I could sit in the low flight pattern of the birds on their way to the bird feeder and watch the gold finches bathe in the fountain and listen to variety of bird choruses and loud humming of the bees in the Australian tea tree. 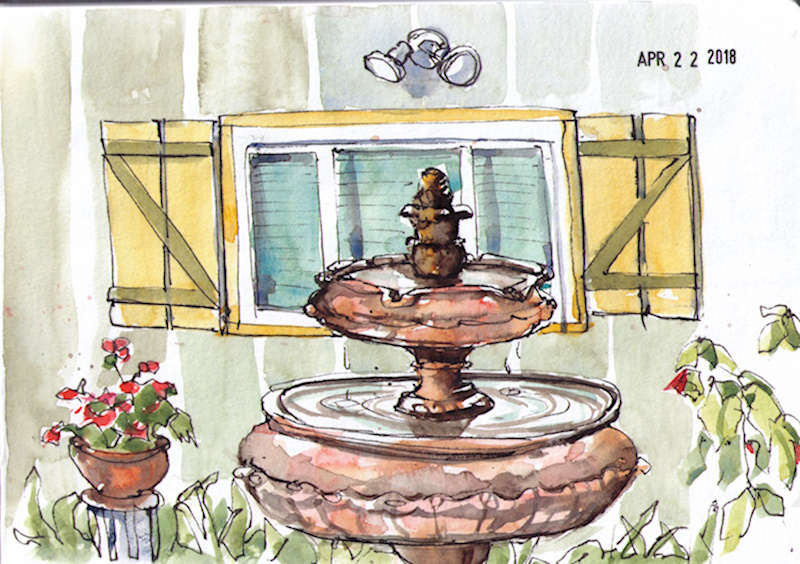 I tend to suffer from the malady of all enthusiastic souls. . .FOMO (Fear Of Missing Out) but I think I discovered for now at least a way to avoid the symptoms while staying home.

Oh, but then I guess I will have FOMO when I’m away from home too, knowing I will miss the baby quail parades and hungry caterpillars growing. I guess there’s no cure for FOMO.