I arrived at Coffee Catz in Sebastopol at about 2:40pm on Saturday, 10 minutes after the monthly Beatles Sing-a-long had started. The room was packed with Baby Boomers belting out the lyrics, accompanied by my friend David Klotz with alternating guitar and piano, along with another guitarist. I squeezed onto the end of a bench at the back, next to a young couple who had their heads together doing chemistry homework, seeming oblivious to the loud singing. I think they were the only people under 50 in the crowd. 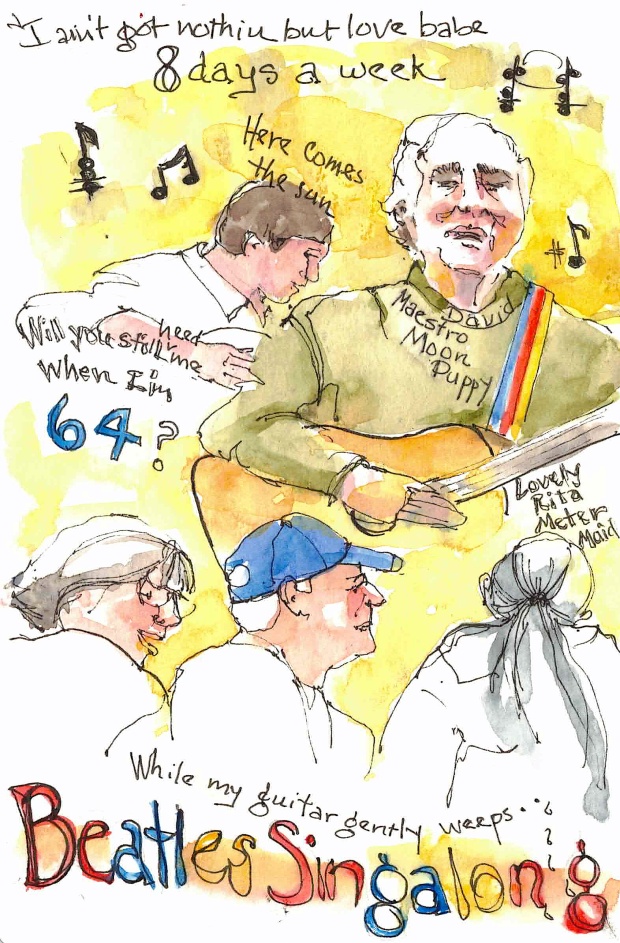 Clearly this crowd was composed of regulars, because not only did they know all the songs (myself included of course), but had learned gestures to go with some of the lyrics. 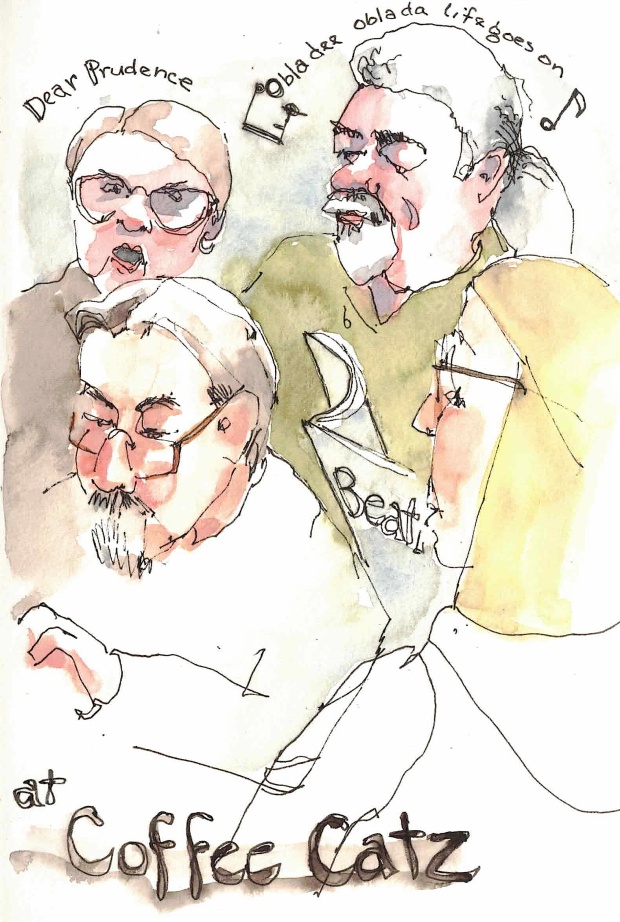 There were songbooks available for people who wanted to sing all the verses. We all know the refrains of course.

Afterward I talked with a couple of ladies who had come from Marin and Napa Counties for this event.  They were old friends of David Klotz, who moved here from Berkeley and was quickly embraced by the Sebastopol music scene.

Next month instead of the Coffee Catz singalong there will be a Beatles Night at the Sebastopol Community Center April 12. Should be fun!

On Saturday Sebastopol was treated to a Beatles Singalong at Coffee Catz led by my friend David Klotz, the irrepressible music man I know from Wavy Gravy’s Camp Winnarainbow! David has recently moved to our town and joined the music scene here, so he was a bit surprised when the Cafe filled to overflowing with enthusiastic singers (of a certain age and cultural disposition) who knew most of the songs by heart.

I got a seat up front so I could sketch while singing, but really I ended up singing more than sketching.  The Beatles were after all, exactly my era, and David encouraged us to not hold back but let our young selves emerge whole heartedly. He started with piano accompaniment which sounded like a bit of his own jazzy arrangements.

Then moved to guitar, and back and forth throughout the afternoon, embodying the songs, music and lyrics, with virtuosity and clear delight. Another fellow accompanied him on the guitar.

We’re all hoping to hear lots more of David’s music now in years to come! Or you can join him as an Adult Camper  at Camp Winnarainbow in summer.