We set out on another Garden District walk, inching up Jackson Street with a stop here to admire the palm fronds spilling over the sidewalk, and there to gawk at the boughs of trees that extended down to the earth and up again, and there to catch sight of the bird serenading us with vigor. We took pictures of lichen painted leaning fences and antique gate handles with rich verdigris patina.

Until finally we just sat down on the sidewalk to sketch the next house. This one looked a bit run down and haunted, causing a passerby to query “Why are you drawing this house?” (meaning, because there are so many nicer looking mansions)

We were headed to one of the historic cemeteries where people were buried above ground inside the tombs, since the water table in the city is so high. The gates were locked and the cemetery closed while much needed maintenance and repairs were happening. But the view from outside the gate was fascinating. There are so many places in New Orleans like this, with a Halloween vibe that makes you want to carve a pumpkin, go trick or treating or read a gothic novel. 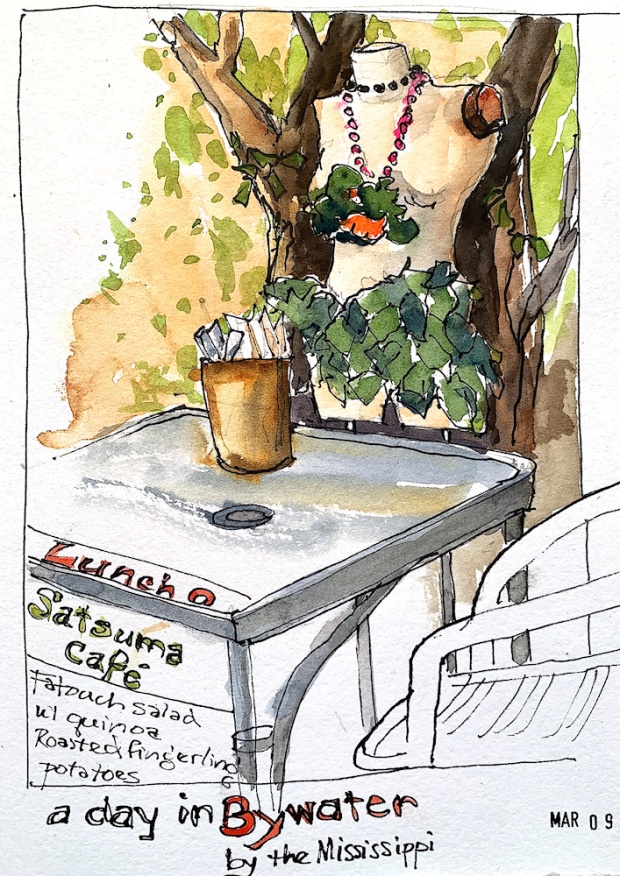 Next day we took two buses (for $.40 total fare) to a neighborhood down river aptly named Bywater. And there I believe we encountered not one other tourist! We walked along the Mississippi on a trail reclaimed from post-Katrina devastation and found a jewel of a hipster lunch cafe.

After lunch we found a hurdy gurdy man outside his music/clothing/etc. resale shop who was friendly and excited to have some prospective customers or at least people interested in the hurdy gurdy.

The houses in Bywater were smaller than the Garden District, but were so charmingly diverse and colorful, that in the interests of time, we did thumbnail paintings.

As we were leaving we talked to a woman who pointed out an intersection nearby that had “bad juju” so that none of the businesses survived for long. She also shared what she’d had to do to exorcise the spirits from her house with a combination of Feng Shui and Voodoo or something like that. Like I said. . .the stuff of Halloween.

Later in the day on the way home I stopped at the Audubon Butterfly Garden and Insectarium because I love bugs! I think it comes from having raised two little boys with whom I spent lots of time finding chrysalids, following butterflies and bringing crickets home for the leopard gecko and  praying mantis. As I walked through the museum I kept having flashbacks of my little boys faces lit up with delight! So of course I revelled in the exotic butterflies and beetles and tasted the bugs in the cafeteria. They have no taste on their own, but are quite tasty with cajun spices and in chocolate chip cookies!

And then it was our last day, with just enough time to wander in and out of all the strange and wonderful shops on Magazine St, grab a last sketch, and meet Brenda.

Somehow we started talking while she was waiting for the bus and I was loitering. It wasn’t long before I learned that she’d worked in the medical field her whole life and had lost her home in Katrina, and that her son had died two years ago. And then she said something that has stuck with me since, as I’ve contemplated the repercussions of the pandemic crisis. She said that what people gained from Katrina was a greater knowledge of what’s really important in life – kindness and caring for each other.

As we parted we shook hands (the last of that act for a long time now!) and introduced ourselves.  It felt a bit like a blessing to take with me on the airplane and into my life at home with the (bad) news digesting and the hand washing and social distancing. . .a blessing to stay kind and caring and find a way to look out for each other.

If you’ve stuck with this travelogue this far, I thank you from the bottom of my heart. I hope you are finding a way to live with the onslaught of news and lifestyle changes. Stay well and let’s stay connected in all the ways we can.

And do lots of art of whatever kind you have access to!