From Princeton Ben, Andrew and I took the train(s) to Brooklyn where I’d rented an AirBnB in Bushwick. Both of them had lived there for a while in the past couple years. The rain we’d had every day in Princeton stopped and the sun came out in Brooklyn. Since it was my first time in Brooklyn, I deferred to them about where we should go. It was soon clear that eating in the excellent ethnic restaurants was high on the priority list! 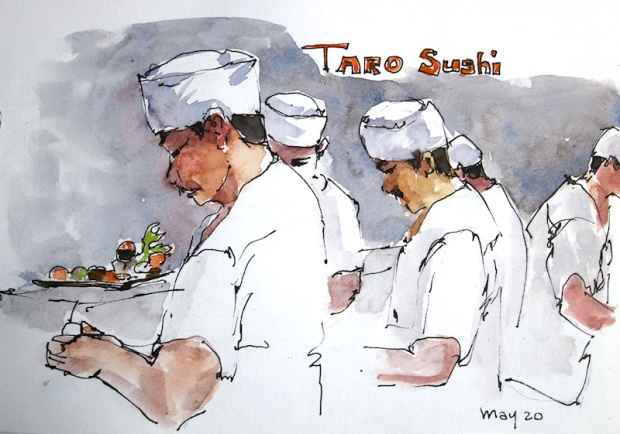 Ben treated us to a steady flow of Japanese delicacies at the Taro Sushi restaurant in Clinton Hill where he had worked for a while. We even had a good view of the chefs, and since I ran out of appetite while more food arrived, I had time for this. 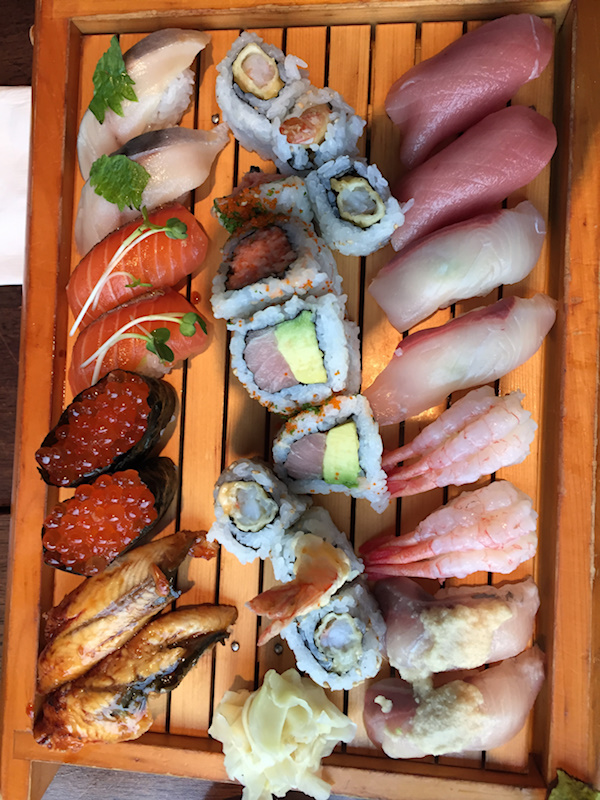 Forgive me if I adopt the now popular custom of sharing photographs of food. The point here being that this was only one of the plates that arrived at our table, courtesy of Ben. 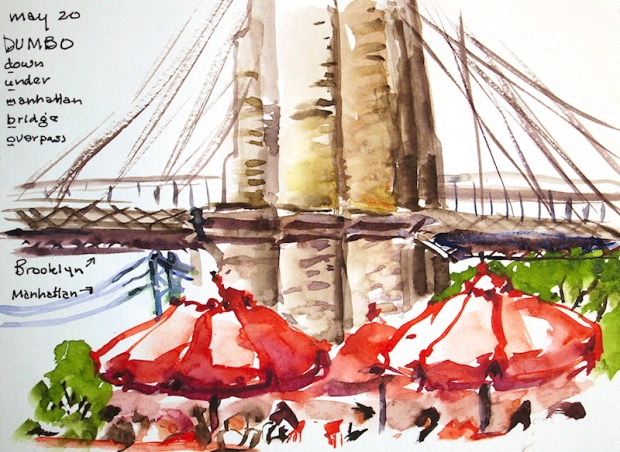 At my first view of the famous Brooklyn bridge in Dumbo I realized I had maybe 30 minutes to sit and sketch something. It was a spectacular evening with throngs of people enjoying themselves. I was trying to swallow the experience whole. Andrew hung in there with me and coached, and even did a bit of video for Instagram. With his encouragement I plunged in with direct watercolor, knowing there was no way I could figure out how to squeeze the whole bridge on my paper (even though I wanted to!) But you know, I have to say that it’s all there in the messy sketch anyway. Gotta love this urban sketching! 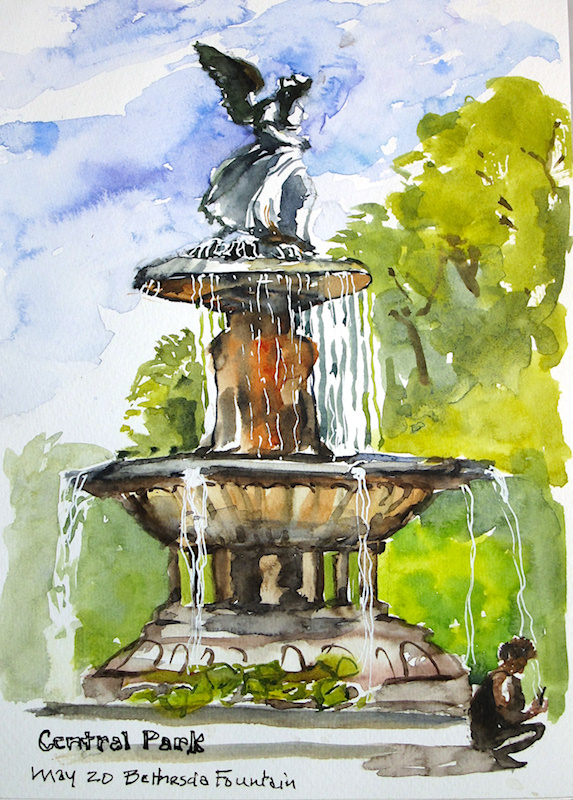 Next day I met up with my beloved sketch buddy and amazing artist Chris Carter  at the Bethesda Fountain in Central Park. Again the weather was perfect and the scene enchanting. We decided to go for direct watercolor. I started with a light pencil layout to get the proportions and then went for it. As an afterthought I put in the figure, who looks like she’s on her cell phone, but actually was sketching! There was a drawing class there that morning. 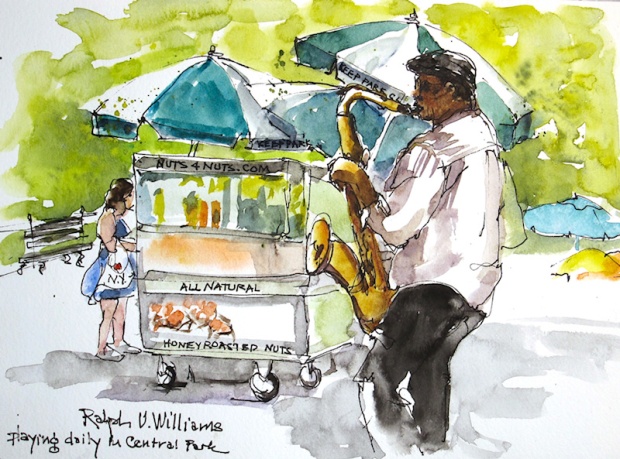 After lunch I sat on a bench and listened to the Jazz sax of Ralph Williams. And later shared the sketch with him. 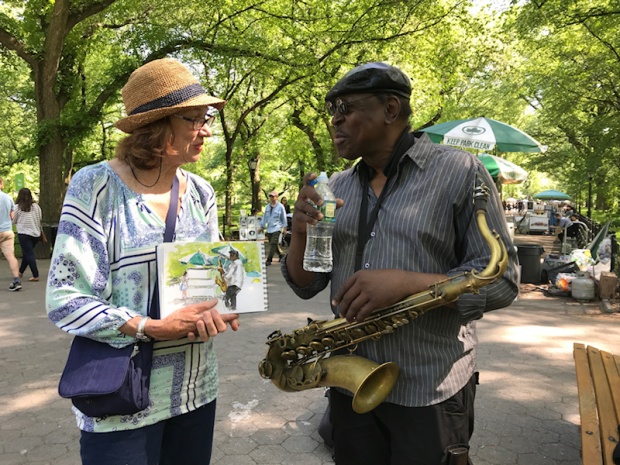 and found out that Ralph has played with some well known Jazz musicians in San Francisco, and now plays in Central Park almost every day. 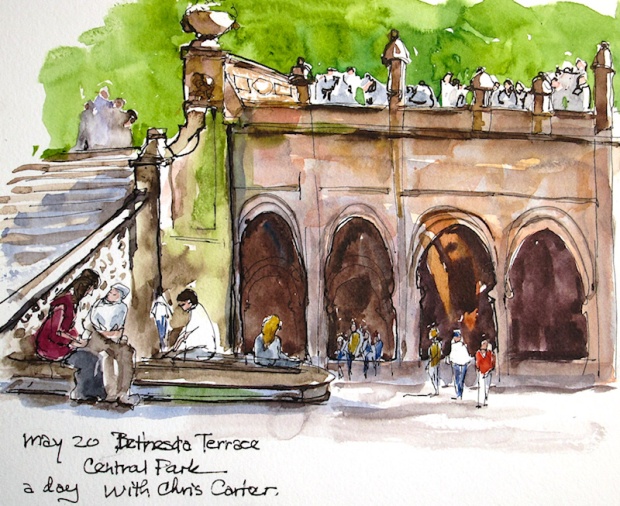 Last sketch of the day I decided to go for it and bite off a big piece of the action at the Bethesda Terrace. What is not included in this sketch however is the performers who were singing to audiences in the fescoed and ceiling-tiled inner spaces of the terrace, while brides and grooms posed for portraits under the arches, and people leisurely rowed small boats in the pond behind us, and thousands more pictures were taken on tourists’ cameras. This is why one makes the trip to NYC, among other reasons.

I always learn so much and get energized by sketching with Chris. You might want to check out her website and follow what she’s up to. Stayed tuned next for a day in Williamsburg, Brooklyn with Andrew and Maura.