There are those trees that end up being old friends. I have lunch with this well-worn apple tree each day lately. I’m watching for birds in its boughs as I munch my salad, but it’s the tree memories that are revealed.

It remembers the day after we moved in over 19 years ago and a neighbor boy arrived to play with our boys of the same age. The boy climbed the little tree and landed on the ground as one of the major limbs broke off. The little tree kept growing and giving shade and shelter to animals in its hollow core ,and fed many generations of goldfinches and Jays and doves and even some flashy Orioles. The occasional squirrel noisily raided its stash. The cats climbed into its arms to see why the birds were getting fed before them! And then there was the time when an errant rooster, that was terrorizing the neighborhood with its untimely crowing, could be found returning to the tree each day. 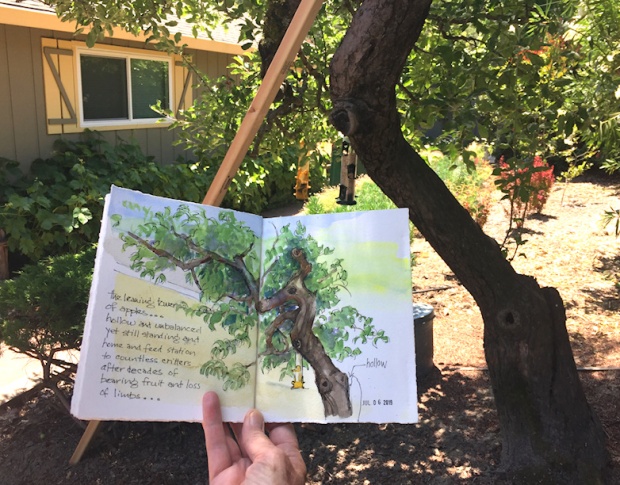 So after lunch I responded to the tree’s need to have it’s story told. It wasn’t the first sketch I’d done over the years. There’s somehow more feeling in it each time though – a kind of bitter-sweetness as we age together.

Yesterday we went around propping up the leaning towers of hollow apple tree trunks. It would be too sad to lose my old friend and the others which are bending under the weight of Gravenstein apples right now. 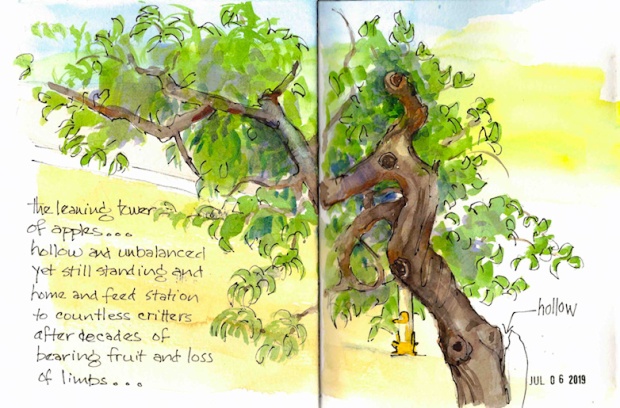 My friend, twisted and bent, a bit like I feel sometimes – I study the beauty of your curves and knots. It’s my way to pay homage to your grit and endurance. . .I’m always listening for your complaints, but hearing none but my own. Stay with me a while longer dear friend.