Two weeks ago I flew east to visit my two sons. Andrew is an architecture grad student at Princeton. Ben, a software engineer in Nashville, came up to join us in Princeton and later in the week in Brooklyn. We packed a lot in and I did my best to keep up with some of it in sketches.

There was plenty of waiting time in San Francisco airport, with a flight delay to Newark, but I was too sleepy (after getting up at 3:30am!) to do more than one.

Andrew had thought he’d be done with classes/building projects etc and apologized that he still had work to do, but I loved it! What sketcher could resist an invitation to be a fly on the wall at the Embodied Computation Lab where his group was working on their installation? You get it, right? The embodied part is the robots. It was not exactly clear how there were getting utilized.

They looked like they were either dueling or kissing!

I tried to catch the positions that the students held for more than 30 seconds while building, but wasn’t so good at predicting which those would be!

Meanwhile it rained almost non-stop and the campus grounds had become lush in that greenest-of-greens, east coast way.

The undergrads had mostly left the campus, but there were studious souls to be found in the numerous libraries and study halls on campus. I don’t think I could have gotten any study done in this particular one on a rainy afternoon.  Too comfortable with it’s stuffed leather chairs and soft light filtering in from 19th century  Victorian Gothic windows that reminded me of an abbey crossed with a gentlemen’s lounge.

The rain stopped long enough that I could head out to the lawn to attempt deconstructing one of the ivy covered buildings. It was still dark and overcast, adding to the challenge, but I was kept company by a very bold little squirrel asking for handouts. At one point he was standing on my shoe and looked like he was heading for my lap! 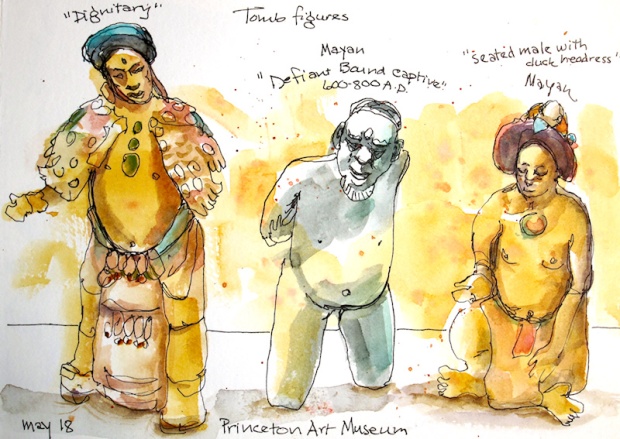 It was still raining the next day, so I headed to the Princeton Art Museum to sketch some tomb figures in the archaeology wing.

This guy was my favorite, especially fierce and powerful. Looked like he could do a pretty fair job of guarding a tomb!

Next day it was raining yet again and though Ben and I took a nice walk along the river, he also had to do some remote work, so Andrew got me into the Frank Gehry designed science building on campus where it’s hard to find right angles. I pulled up one of the cushy chairs (you find everywhere for students a Princeton) to a tilted window to study the tilted scene below through rain splattered glass. The curvy brown structure below is none less than the Hedgehog and the Fox, a massive sculpture by Richard Serra similar to the one you see in the lobby of SF MOMA.

On the second floor of the same building is a study hall called the Tree House and looking down from there you see this lobby. The colors and angles! How could I resist.

Next day we headed to Brooklyn. Stay tuned for more. . .