My husband teases me about choosing movies where there are costumes. Yes, I’m a fan of Masterpiece Theatre. But it’s been years since I’ve been to a Renaissance Fair. I used to take my boys when they were little and help them dress with capes and toy weaponry tied at the waist.

But much as I love costumes, especially to sketch, I chose to wear only the lightest, coolest clothes in my wardrobe (on a scorcher of a day) for this festival titled “Much Ado about Sebastopol” held in Ives Park.

We strolled past the booths selling trinkets and tents where costumed characters lounged and the tarot card reader and the children’s games and the food and settled on hay bales to watch the fencing demonstrations. There’s actually a fencing academy in Santa Rosa! 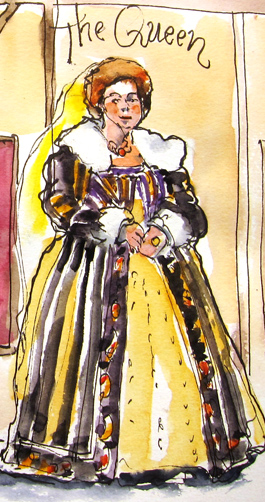 . . .the Queen and her flamboyant nobleman. I was sketching furiously to try to keep up, when the next performers arrived, Bella Donna.

The Italian courtesan ladies with their hilarious drama in song about a beautiful young woman who must make the decision to marry (the handsome young rake proposing to her), become a cultured courtesan, or enter a nunnery – the only three choices to a lucky woman in Renaissance Italy I suppose.

Luckily I’d thought to eat before coming, because we were glued to our hay bale seat not wanting to miss the next acts either! The Brass Farthing is a “group of stalwart lads”, professional singers who performed bawdy drinking songs. Next came the Morris dancers, but I needed a bit of rest in my pen wielding hand, and honestly I still haven’t gotten the hang of drawing dancers in movement.

Still wanting to enjoy the memories of a fine day once I got home, I sketched this bonnie scotsman from my iPhone image.